10 Signs Of A Mature Leader

When I think of great leaders, I think of Caleb. He had a heart that could overcome anything and stay fully alive. He was full of vigor at every age, never losing sight of all God has promised him, well able to overcome and conquer until the day he stepped over into Heaven. He had the kind of faith that inspired everyone.

Out of the million or so men Moses led out of Egypt and across the desert on an 11-day journey, that evolved into a 40-year quest, Caleb was one of only two men who actually stepped foot across the Jordan River into the Promised Land (Numbers 14:30). The other was Joshua.

Just two. Out of a million.

A generation died in the wilderness, and two other generations were born. Hanging on to the promises of God, Joshua and Caleb lived through it all and saw the land flowing with milk and honey (Numbers 13:27). They never forgot all that God did for them, they remained and faith-filled for decades.

Caleb, in particular, had a different spirit. When, at forty years of age, Moses sent him to spy out the land, he came back with a wholehearted report. “Then Caleb silenced the people before Moses and said, ‘We should go up and take possession of the land, for we can certainly do it’” (Numbers 13:30). He knew he was “well able.”

Everyone else was negative and fearful. They saw giants and felt as small as grasshoppers in comparison (Numbers 13:33). But not Caleb. And because of that, God promised him something: “Because my servant Caleb has a different spirit and follows me wholeheartedly, I will bring him into the land he went to, and his descendants will inherit it” (Numbers 14:24). 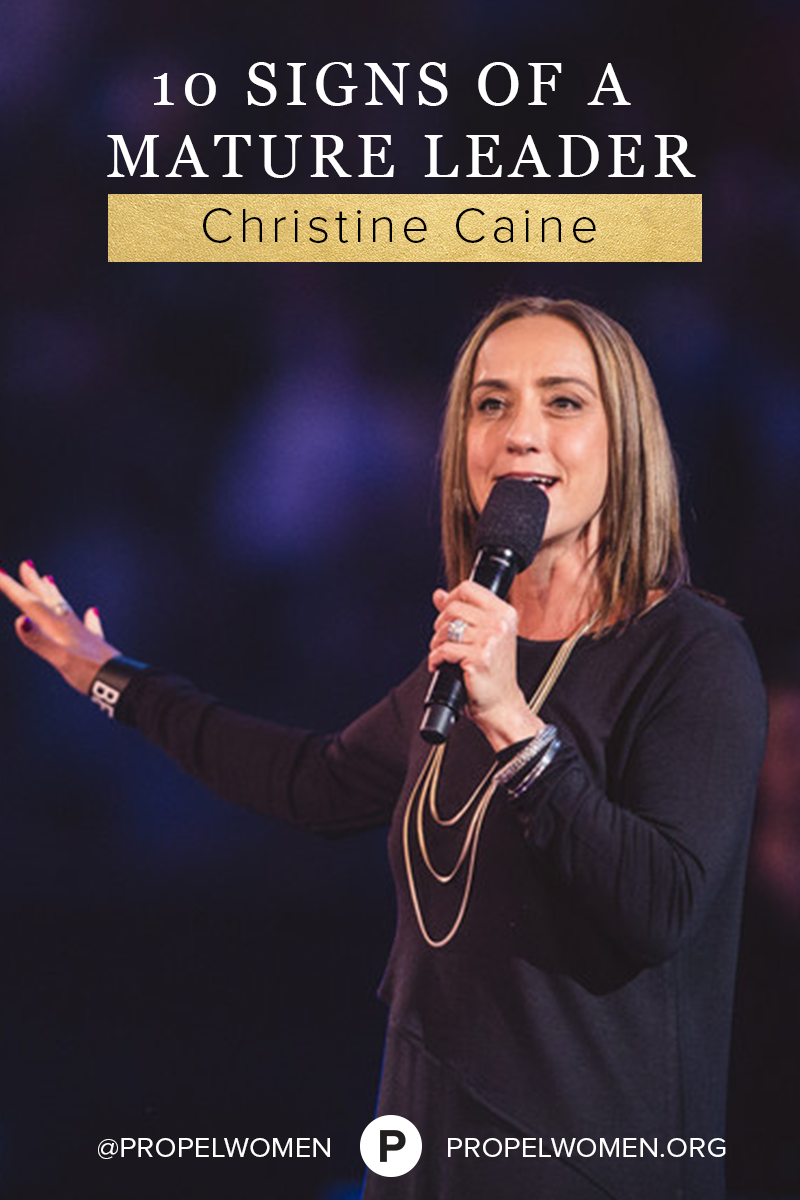 Caleb wasn’t the most gifted, or most eloquent or the smartest. But he was the most wholehearted.

I love how he says, “I am still as strong today as the day Moses sent me out; I’m just as vigorous to go out to battle now as I was then” (verse 11).

What enthusiasm. There is nothing more wholehearted than someone who has been a leader for a long time and is still full of optimism.

Caleb was 85 and “just as vigorous.” He kept his zeal and his joy. He hung on to the promise: “Just as the Lord promised, he has kept me alive” (verse 10). And he wasn’t just alive, he was all in. He was a leader that remained young at heart—but not immature. He understood how God wants us to be full of wide-eyed wonder, but not foolishness. How he wants us to be childlike but not childish.

In our journey to inspire as mature leaders, we can learn a lot from Caleb. If we grew our leadership capacity like him—if we matured like him—there would be nothing we couldn’t do.

I want to share with you 10 Signs of a Mature Leader to help you develop your leadership to stay wholehearted no matter how many years you lead.

1. Maturity is unshaken by flattery or criticism.

When our identity is secure in Christ, we can live free from the approval of others. I have been applauded after a message but ignored on social media. Regardless, to be a mature leader, my obedience and confidence cannot be affected by either. (1 John 2:27)

2. Maturity has the ability to delay gratification.

The ability to wait and understand that timing is just as critical as knowing the right decision is key. Leaders who want it all now will lose it all later. (Hebrews 6:12)

The ability to maintain is just as valuable and mature as the ability to pioneer. Mature leaders are just as faithful to a project when it becomes tedious. (2 Corinthians 8:11)

4. Maturity has a spirit of humility.

It’s important to give credit to your colleagues, to share the wins, to give your opinion, but let others go first. It’s thinking of others more and ourselves less. (James 4:10)

5. Maturity is not ruled by emotions.

Jesus to our heavenly father, “Not my will, but your yours be done” (Luke 22:42). His obedience wasn’t based on his feelings, but his decision to obey.

Mature leaders know it’s a privilege to serve on the team. They have no sense of, “I deserve this.” (1 Thessalonians 5:18)

7. Maturity prefers others to self.

A mature leader knows she’s worth more to the team when she doesn’t have to be the start of the team. She values others more than herself. (Philippians 2:3)

A mature leader doesn’t have a “know-it-all” spirit, but a “tell-me-more” spirit. They are lifelong learners. (Proverbs 9:9)

Mature leaders come up with solutions rather than deposit problems on their leader’s desk. They are faithful to execute. (Titus 2:7)

Mature leaders don’t have to be micromanaged. They can be trusted to carry the vision and greater responsibility. (Luke 16:10)

When your heart is all in—when you contribute as a mature leader—you will do anything, go anywhere, and give everything. Like Caleb, you will be wholehearted—and you will succeed.