3 Ways to overcome The Fear of missing out

We have to talk about this whole fear of missing out thing. FOMO is familiar and everywhere and real. I think there’s real power in naming it, claiming it (cringing at it), and doing battle with it.

My FOMO has caused me to make some terrible decisions (and that’s just as an adult. My adolescent years could be a case study in it!). FOMO has caused me to chase Pokémon around my neighborhood, almost start a podcast because all the cool kids were doing it, and dye my hair pink. The list could go on and on.

I’m currently battling the whole life-changing magic of tidying up phenomenon. It seems like everyone I know is posting pictures of themselves tossing their belongings and finding a new level of joy in their minimalist environments. Apparently you are supposed to throw away everything that doesn’t bring you joy.

I imagine myself throwing away my bathroom scale, the elliptical machine, the broom, and all my bras.

But still, I’m tempted to buy the book everyone is raving about and start purging away because I don’t want to miss out.

Because we live in a time where we have a world of information, images, and videos coming at us constantly, FOMO isn’t going to go away. In a world of constant connection, FOMO, and its evil twin, social comparison, are the struggles of our time.

Think about the story of the prodigal son and his epic case of FOMO. There are not many details given us in Scripture as to why he asked his father for his inheritance, but I like to imagine FOMO had a part in it. He must have felt the world outside his homeland offered something he was missing, and he had to have it at all costs. 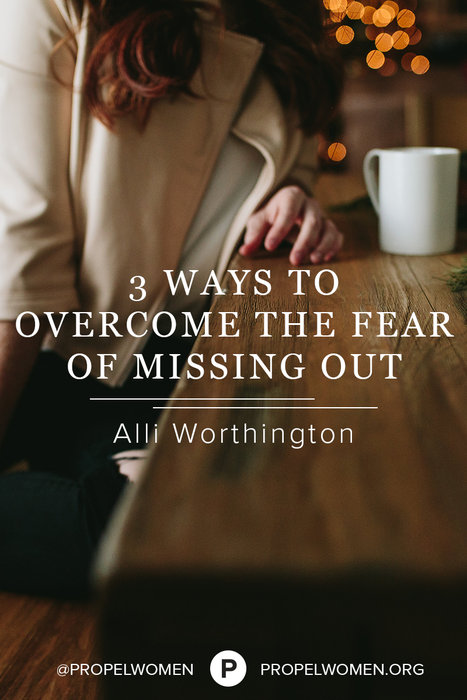 He had everything: a stable home, a loving father, everything he could possibly want or need there at his fingertips. And he gave up everything to answer the call of FOMO.

What happened to the prodigal son is the same thing that happens to many of us. We question, “If we stay here, in this place God has created for us, within the confines and safety of his will, will we be missing out?”

Knowing that the enemy uses FOMO to draw us outside of the circle of God’s will is the primary reason we must have a battle plan to fight him.

You can follow these three steps to make sure you don’t let FOMO get the best of you:

1. Switch your FOMO into JOMO

The way not to buy into the fear of missing out is by opening our eyes to what surrounds us right now, finding the magic in our lives, because often it’s hidden in plain sight.

When we see what is wonderful around us we can change our FOMO into JOMO: the Joy of Missing Out.

This is one of my favorites. Do happy now means going for the quick win. Do something you love immediately: go for a walk, snuggle your kids (or pets), watch your favorite movie on Netflix, read a good book, or do whatever it is you do that always puts a smile on your face.

The great news about FOMO is it is temporary. When you are in the middle of a FOMO attack, going for the quick win, the fun distraction, or even a quick cuddle from someone you love will usually be enough to let those FOMO storm clouds pass on by.

It is only by keeping focused on him and trusting his plans for me that I can silence and defeat the work of the enemy and his tool: FOMO.

Jesus said, “Do not let your hearts be troubled. You believe in God; believe also in me” (John 14:1). His command is so clear, so simple—“Do not worry, believe in God, and believe in me.”

He makes our paths straight; he guides us along still waters; he restores our soul; he knew us before we were born; he sees our lives from beginning to end; and he alone determines our destiny.

Because I know he holds the future, I don’t have to fear that I am missing out. On anything.

And that’s the truth for you today, Friend, God will make sure you are exactly where you are meant to be!

This is an excerpt from Fierce Faith: A Woman’s Guide to Fighting Fear, Wrestling Worry, and Overcoming Anxiety. Alli Worthington is a mom of five sons, wife to Mark, and the Executive Director of Propel Women. She is also the author of Breaking Busy: How to Find Peace and Purpose in a World of Crazy.