A CONVERSATION WITH PAULA AND CHRISTINE

Christine Caine and Paula Faris bond over My Big Fat Greek Wedding, Christine’s latest book, and empowering the people around them to step into their true purpose and calling. 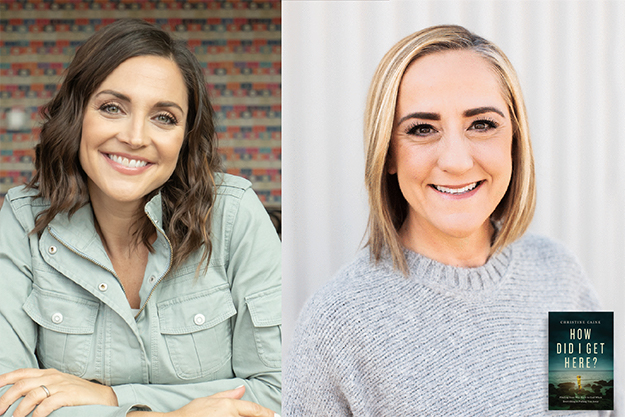 In her newest book, Christine shares what she's learned about discovering a renewed passion to keep going, even when everything in you wants to give up. This book is all about being on fire for Jesus and walking confidently in your God-given purpose.
Order How Did I Get Here? today.

In this Q & A, Christine is interviewed by award-winning journalist Paula Faris—author, mom of three and host of The Paula Faris Faith & Calling podcast. Most recently, Faris spent 9 years at ABC News, during which she was a co-anchor of “Good Morning America’s” weekend edition, co-host of “The View” and host of the Journeys Of Faith podcast.

Paula: We hear a lot about your Greek heritage in this book. It makes me recall one of my favorite movies, My Big Fat Greek Wedding. Was that your life?

Christine: Yes! It was my big fat Greek life! All of it. The spitting. The eating. The loads of relatives at every gathering. My aunts weighing in on every decision about my life. It was just like the movie!

Paula: Marrying Greek is almost a mandate in the Greek culture. You thought you’d marry Greek, then Nick came along. He’s an English Aussie. What was your family’s reaction?

Christine: My getting married to a Greek and having lots of Greek babies was everything to them. As the years went by and I remained single, my mum was at a loss. By the time Nick came along, I was almost thirty and they were mostly thankful someone actually wanted me. To them I was old, too old for anyone to want to marry, and I think they had reached the point where, given the chance, they would have been willing to pay someone to marry me. With money, tomatoes, livestock, whatever it took. When they realized Nick loved me, I think they were more than happy to hand me off to an English Aussie, because being Greek was no longer the most important quality. Being willing to marry me was.

P: Though you were raised Greek Orthodox, your family wasn’t exactly thrilled when you became a Christian. Why?

C: In our Greek Orthodox culture, it was something you just didn’t do, and being the first in our family to step outside our religious traditions, they really didn’t know how to handle such an independent decision. Though they loved me, for me to convert to Protestantism, and then to begin to speak publicly as a Christian leader, was embarrassing. They truly felt I had shamed them, and their response was to not speak to me. It was heartbreaking for them and heartbreaking for me, but I don’t think any of us knew what to do about it. Though we all talked nonstop—because we’re Greek—I don’t think any of us knew how to talk about something so tender and life-altering.

It took a few years, but they all came around. They saw our marriage, our children, and the way we lived, and that the decision I made led to a life of flourishing. My mum came to realize that what Nick and I had was real, and that I hadn’t abandoned my family. And I was still Greek!

P: You admit that you knew virtually nothing about human trafficking when you launched the A21 Campaign back in 2008. If I were in your shoes, I would’ve felt completely inadequate to make a positive impact in an area I knew nothing about. How did you avoid letting feelings of inadequacy paralyze you? And what advice would you give to the woman reading this who is being called to do something outside of their comfort zone, something they don’t feel qualified to do?

C: Once I knew human trafficking existed and that God wanted me to do something to stop it, I spent the first few weeks thinking about everything I didn’t have and everything I couldn’t do. It was overwhelming to think about 40 million people trapped in slavery around the world. When I got past being overwhelmed, I knew I needed to start where I was with what I had. I began researching and working at educating myself. I have a good friend who was the deputy director of UNICEF, so I began asking her questions, getting her to tell me everything she knew about how and why people were being trafficked.

At the same time, I considered what I already had. For almost twenty years I had traveled the world, teaching and serving in churches, becoming friends with so many pastors and leaders. I remember thinking that although I didn’t have all the knowledge that I needed, I did have a full schedule of speaking, so I could incorporate five-minutes to share that this injustice I never knew about before really does exist, and although I don’t know what I’m going to do, I am going to do something.

All I knew to do was start where I was with what I had—and that’s the advice I would give anyone who feels God is leading them to step outside their comfort zone and do something they don’t feel qualified to do. I’m not sure God looks to see if we’re qualified as much as he looks to see if we’ll be willing and obedient. He wants us to move forward in faith, taking the next right step and doing the next right thing. He wants us to trust him with what he’s put in our hearts to do.

P: Okay, let’s dive into your brand new book How Did I Get Here?: Finding Your Way Back to God When Everything is Pulling You Away. You’ve written over 10 books. If people were to only read one of them, why should they read How Did I Get Here?

C: It’s definitely my most personal book. Finding myself in a place where I wasn’t sure I wanted to keep going the way I had always been going shook me to my core. But out of that place I found the way forward and I discovered how we can keep ourselves anchored in Christ so we can run our race and go the distance.

P: In the beginning of the book you share the story of how you realized you had drifted off-course. Can you tell us a little bit about that moment?

C: I think in all our lives we sometimes face the perfect storm where enough circumstances pile up, they overtake us. For me, the five years leading up to the writing of the book were filled with overwhelming situations and great loss. While I was celebrating at my 50th birthday party, my mum unexpectedly passed away. Her death triggered a new level of feelings and questions about my birth mother that unsettled me. Then, my sister-in-law, who had been a part of my life longer than I’d been married to Nick, died. Not long after, Nick’s sister died. And then one of his brothers-in-law. Within a short period of time, we went back and forth from the U.S. to Australia for all these funerals. At the same time, I kept moving forward with ministry, with the work of A21, and leading our team at Propel Women. But in my private life, I was grieving.

On top of all this, a very close friend betrayed me. If it had been someone distant, I could have handled it. But being a friend, it nearly took me out. I’m very thick-skinned, but extremely tender-hearted, so this hurt pierced me deeply.

It was out of these experiences that I found myself in a place I never imagined. I remember saying to Nick, “I know I can keep going. I’m strong. But I don’t know if I want to.” Never in all my years of following Jesus had I said or felt that. It was moments later that I found myself asking, “How did I get here?”

P: How different was this than anything you had ever experienced in your faith journey?

C: For the first time, I didn’t know if I wanted to keep pressing in and pressing on. Reaching out for the next thing. Pursuing the adventure. It wasn’t a crisis of faith; rather, it was a sober realization that, if I were to keep going, it would probably mean more sacrifice, more pain, more heartache, more exposure, more vulnerability, more attacks, even though all of that would mean more fruit.

I knew that deep down I loved Jesus and his plans for my life more than the place where I was, so there was no way I could not keep going. Still, I had drifted, and I had to find the way forward—and that’s what I share in the book.

P: Have you found that drifting is a normal thing, something most people experience?

C: Yes, because there are so many ways to drift. All you have to do to drift is nothing. And there isn’t one of us who isn’t prone to drift, including me.

P: Thanks for sharing all of this with us, Christine. I want to leave readers with a couple of practical steps they can take if they’re thinking they might be drifting right now. Whether we notice drifting in our parenting, our work, our faith, our relationships, whatever it may be, what are some steps we can take to course correct? What helped you get back on track after you realized you had drifted?

C: Jesus is the anchor of our soul, and like any anchor, there is a chain made of links connected to the anchor. If one of those links wears thin, then the entire chain is compromised. I have learned to check the links in my chain regularly, to ensure I’m doing all the practices that keep me connected to him—and I list the most important links in the book. But the master link, the one that really holds it all secure is trust. If I’m not trusting Jesus with every area of my life, then somewhere I have a weak link, and most likely, I’m drifting in that area. So the first step to stopping any drifting in our lives is to drop anchor in Jesus once more. To recognize where we‘ve quit trusting, where we’ve taken matters into our own hands, or grown distant from him, and place our trust in him once again. We have to put our disappointments into his hands once more. We have to put all the circumstances we don’t understand and may never understand into his hands once more. All of it. And keep trusting him even when we cannot trace him in our lives.