Are You Selfless — Or Just Passive?

Are You Selfless — Or Just Passive?

Jennifer was a peace maker.

When she came to my counseling office looking for marriage advice, the first thing that stood out to me was how much she had bottled up inside. She sat down and spilled the beans about everything her husband was doing (and not doing) that was having a negative impact on her, and in turn, on their marriage. He was critical, perfectionistic, and was on her about every little thing. And when he didn’t get his way? He would withdraw in irritation and anger until things blew over. Then he was back to acting like nothing happened.

In her efforts to keep the peace, she decided she was just going to stay quiet and let things go. She would listen to his rants and do her best to accommodate, without ever taking the time to express her personal needs or emotions. But as I pointed out to her, a person can absorb only so much conflict until it finally needs a way to escape. And eventually, like lava spilling from a volcano, it will find the path of least resistance. Sure enough, there would come a time when Jennifer could take it no more, and she’d burst into a puddle of tears, feeling angry, helpless and frustrated. But instead of expressing her emotions and dealing with the situation, her cycle of stuffing things simply started again. 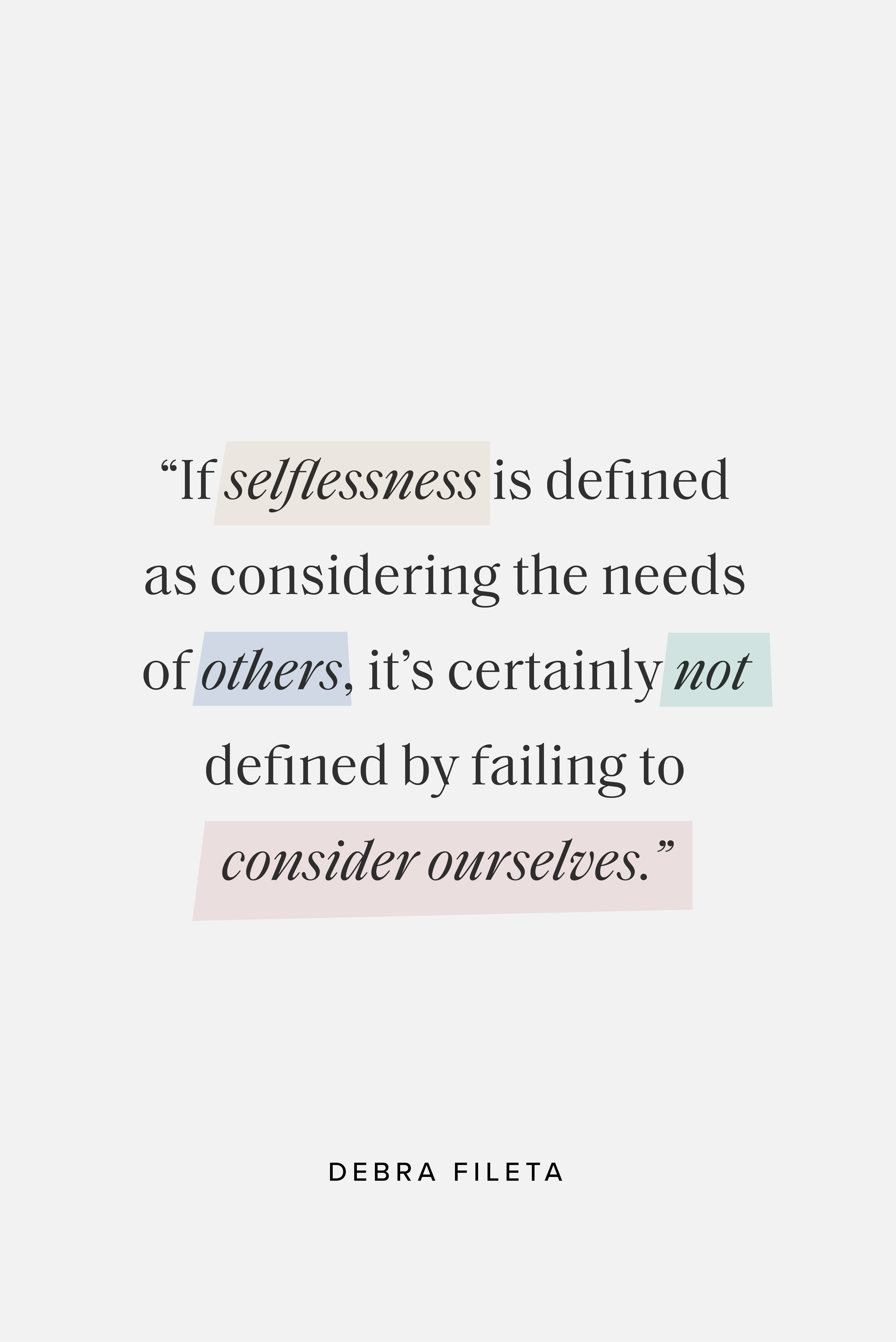 Jennifer was confusing selflessness with passivity. It’s something we as Christians often do. In unpacking her relationship history and talking through her past, she realized that she had been a passive person for a majority of her life. She wanted peace so badly, that she would sacrifice her own needs and health just to get it.

Let’s be clear: there isn’t anything selfless about absorbing conflict, accepting criticism, or allowing someone to treat you with disrespect—not even your spouse. If selflessness is defined as considering the needs of others, it’s certainly not defined by failing to consider ourselves. We need to get this aspect of selflessness right, because a life of passivity will do as much damage to our relationships as a life of selfishness.

WHAT SELFLESSNESS IS NOT

How do you recognize if you’re truly selfless or just passive? How do you know if you’re putting the needs of others first or simply not considering your own? As with most relationships and interactions, there are no hard-and-fast rules or magical formulas to becoming selfless. But as a licensed professional counselor, there are a few signs and signals that you’re actually choosing passivity.

Keeping Your Hurts to Yourself

Have you ever had one of those moments when you’re sitting in the car with your spouse and one of you is obviously not talking? It usually goes something like this:

And on and on the hopeless conversation goes.

But selflessness does not mean we allow ourselves to slowly die on the altar of saying nothing. It doesn’t mean we hide our emotions at the expense of our personal health and well-being. True selflessness is about loving others well, but the vicious truth is that we can’t love others well until we’ve learned to value and respect ourselves (Matthew 22:39).

Failing to Voice Your Needs

You can’t hold someone responsible for something you never told them they were responsible for. I like that concept, because it really identifies the need for healthy communication and our personal responsibility in getting our needs met. We expect people to read our minds, know what we need, and then act on it. And when they fail to do so, we walk away feeling frustrated and hurt. They didn’t give us what we never told them we needed! It doesn’t make much sense, and yet all of us struggle with this in relationships.

Selflessness does not mean ignoring your needs or keeping them to yourself. It doesn’t mean staying silent and expecting others to know what you want or need. And it doesn’t mean holding back, particularly when speaking up could be beneficial to your personal health and the health of your relationship. Healthy relationships are defined by give-and-take, and being a person who only gives and never takes is living a passive life, not a selfless one. It’s up to you to learn to identify your needs and then with God’s help, express them in a respectful, assertive, and loving way.

is a Licensed Professional Counselor, national speaker, relationship expert, and author of Choosing Marriage and True Love Dates, and Love In Every Season. This article was adapted from an excerpt of Choosing Marriage, and is used with permission. She’s also the host of the hotline style Love + Relationships Podcast. Her popular relationship advice blog, TrueLoveDates.com, reaches millions of people with the message of healthy relationships. Connect with her on Facebook, Instagram, or Twitter or book an online session with her today! This article was adapted from the book Choosing Marriage and is used with permission.