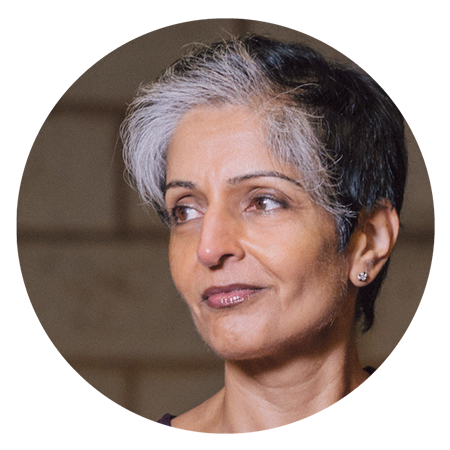 I was born in a traditional Punjabi Sikh family. My mother tells me that she wept and apologised to my father when he visited the hospital after my birth, because she had produced a girl. Back then, we lived in a small two and a half bedroomed house that, for economic reasons, was shared with two Black Jamaican families (this made our family unique at the time). Each family occupied a bedroom, and the rest was shared including: a very small kitchen, bathroom and outside toilet.

Meeting Jesus in the Margins

Our street in Smethwick (Marshall Street) became infamous in the 1960’s and was described as the most ‘racist street in Britain’. Known for its segregation, it was a place where Black and Southeast Asians were afraid to walk alone at night (and even by day). It was also the street that African American Civil Rights Activist Malcolm X visited having been invited by the Asian Workers Union to lend his support to their struggle against racism and segregation. Tragically nine days later, on returning to the US, he was assassinated.

As you can imagine, the atmosphere was often toxic and intimidating but it was also my ‘normal’, my ‘playground’… Smethwick had a reputation as an area to be avoided – it was… the Samaria of its day.

Despite our challenges, good things did happen! There was a church which held a youth club every Friday which attracted many of the children from the surrounding area including those from Marshall Street (ironically Black, Southeast Asian and White). It provided a space for us to exhale and be children. We played games, ate sweets, and also heard stories about someone called ‘Jesus’. After one particular story, I recall, thinking to myself, “I would like to have a friend like Jesus”. I was a preschooler at the time, so I’m not sure whether I thought in Punjabi or English! Nevertheless, the arrow prayer went up.

Unfortunately, once my parents and community realised what (and who) I was being exposed to, my time of attending church was cut short. I was accused of bringing “shame” and “dishonour” on them all. However, a seed had been sown in my heart and my prayer had been received.

The Challenges of being a Culturally Sikh Christian

Many years later, while at university, I had a life changing encounter with Jesus and said, ‘yes’ to his invitation to… “Follow me”. My life was never the same again… Those two words, “Follow me”, were to be a constant anchor and reminder, which is just as well, because although I didn’t expect navigating life as a follower of Jesus to be easy, neither did I expect the nature of the challenges that followed.

The first was the culture shock. I was a culturally Sikh, Punjabi follower of Jesus, so, when I stepped into a British church for the first time, I found myself completely disorientated. I couldn’t understand why people sat on carpet strips placed on benches (pews) or why people wore coats, hats and gloves indoors throughout the service (it soon became clear that someone often neglected to turn the heating on). I couldn’t understand why people wore shoes in the place of worship, this was alien behaviour in the gurdwara of my youth (a place of worship for Sikhs) and didn’t God command Moses to remove his sandals when standing on Holy ground?

Confused by the Lingo

The second challenge was people seemed to speak in ‘code’… I struggled to understand the language of many songs and hymns we sang, as well as some versions of the Bible we used and frankly the sound of the organ was terrifying! It seemed as if people stood up and sat down without rhyme or reason, leaving me feeling awkward. It was exhausting! But worse was still to come… when I stepped out after the service, there was no food to greet me! I literally expected to experience the ‘table fellowship’ and ‘communion’ described in the New Testament! Of course, I was used to the life of the gurdwara with its intergenerational gatherings, generous hospitality expressed in communal meals of delicious vegetarian dishes, with hot buttered rotis (a kind of flat bread) and sweet spiced chai (spiced tea)… Not that it’s all about food!

I felt like an outsider, while everyone else appeared comfortable in the shared culture, language and dress code… (don’t even get me started on the latter!!) I quickly had to adjust to my new ‘normal’, it took me longer to realise it was mostly cultural paraphernalia anyway and that all I needed was to hold onto Jesus’ words, “follow me…”

The third challenge came a few years later when I ‘sensed a call to ministry’. No one was more surprised than me! Confession… I tried to run from God’s call. As I surveyed the landscape before me, I couldn’t see anyone who looked like me and with few to turn to for advice or support I was, understandably, afraid. I’d been left to navigate the resistance and opposition of structures and systems run by people who had clearly never encountered anyone like me. Once again, I drew strength from Jesus’ words, “follow me” to eventually become the first (and currently only) Southeast Asian woman minister within the UK Baptist Union!

A wise friend once said, ‘God has called me, not in spite of who I am but because of who I am.’ Today Jesus continues his call, “Follow me…”
Will you?

Rev. Cham Kaur-Mann is the first Asian woman Minister with the Baptist Union of Great Britain.  She is Co-Director of Next Leadership, whose mission is to transform leadership by equipping leaders to serve well, in today and tomorrow’s world.