Relationships of all types require immense nurturing to foster healthy connection and communication. I have often heard from clients in my private practice how people want to spend their time with people that enhance their lives; that there is this sense of mutual give and take in the relationship.

See, we all love to experience feeling good in relationships. But what about when there is conflict? We have relational issues in every aspect of our life whether family, business, church, or friendships. Some people attract high conflict situations and others are more conflict avoidant by nature.

Many people assume that when there is conflict, it means there has to be a fight. This may be the case for individuals who were raised around unfair fighting practices and/or endured parental substance abuse, physical or sexual abuse, and domestic violence. These kinds of family issues often leave children growing up into adults with little knowledge of healthy closure.

As Neuropsychiatrist Dr. Dan Siegel has stated in his work based in attachment and interpersonal neurobiology, “Repair is more important than attunement.” Repairing relationships is a key sign of healthy maturity and that you are a secure connector. When you repair with individuals you are saying,” I am invested in this relationship, and I want to take responsibility for my part and find resolve." 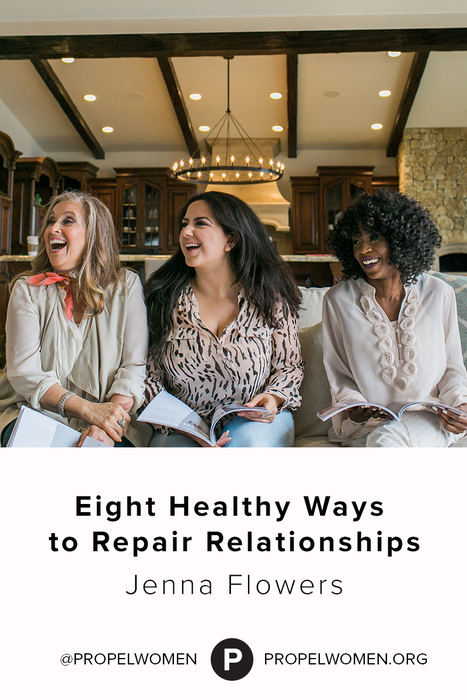 The question you often have to evaluate in repairing hurts is: to what extent are you invested in this relationship? If you are invested, then you need to take the risk to repair. Sometimes repairing conflict feels really vulnerable. To repair well with someone can be one of the most vulnerable things you can relationally do because you are open and available to hearing how you hurt someone or you are sharing how you were hurt. Both call for being emotionally brave.

If you have decided to repair with someone that you are invested in, then consider the following:

Dr. Jenna Flowers is a licensed Marriage and Family Therapist, Speaker and Author of The Conscious Parent's Guide to Coparenting: A Mindful Approach to Creating a Collaborative, Positive Parenting Plan. You can connect with Dr. Jenna on Instagram or her Website.