Endurance: It's how You Get There

For eight short years, from 1983-1991, the toughest race in the world was held in Australia. The 544-mile race was called the Westfield Sydney to Melbourne Ultramarathon.

It doesn’t have neither the history of great races like The Boston Marathon, which is the oldest and best-known in the world, nor did it ever have half a million spectators lining the roads or 30,000 runners.

But what it did have was Cliff Young.

Cliff Young was a 61-year-old potato farmer who had lived his life tending 2,000 sheep on 2,000 acres—on foot in rubber boots.

When he decided to enter the ultramarathon, he wasn’t a professional runner with the latest running shoes and chic clothing. He didn’t have corporate sponsors. He didn’t even know the rules of the race.

But he did have one of the single most powerful qualities that guarantees success. Every. Single. Time. He had endurance — the power to withstand pain or hardship; the ability and strength to continue despite fatigue stress or adverse conditions; the capacity to bear up under difficult circumstances.

3 Ways To Build Your Endurance Now

Before I tell you the rest of Cliff’s story, know this: For us to run our race and succeed—regardless of what we’re reaching for in our lives—just like Cliff did for the ultramarathon—we have to build our endurance. 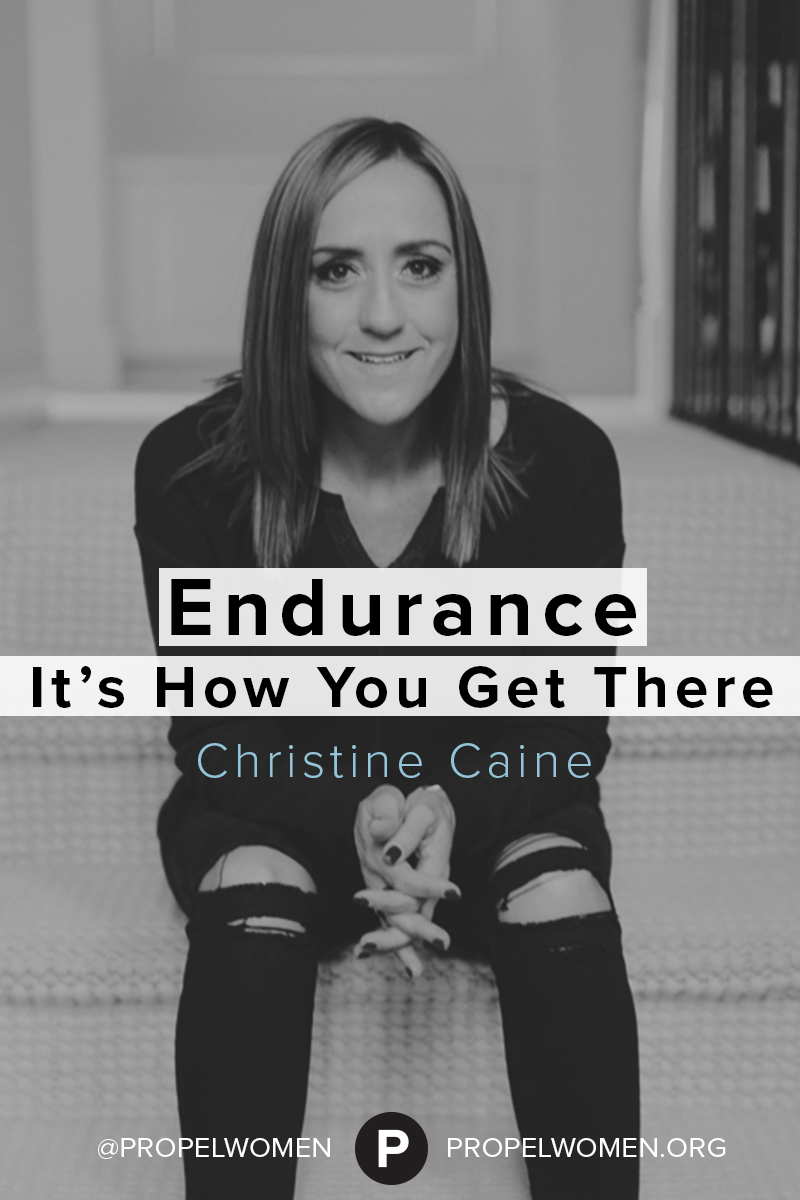 Endurance is what ensured Jesus’ success through every pain, suffering and rejection, and it’s what will ensure ours:
“Therefore, since we are surrounded by so great a cloud of witnesses, let us also lay aside every weight, and sin which clings so closely, and let us run with endurance the race that is set before us, looking to Jesus, the founder and perfecter of our faith, who for the joy that was set before him endured the cross, despising the shame, and is seated at the right hand of the throne of God. Consider him who endured from sinners such hostility against himself, so that you may not grow weary or fainthearted.” (Hebrews 12:1-3).

Endurance is key to your achieving what God has created you for and called you to do.

It’s a quality only built under pressure—something we naturally tend to avoid.

But to succeed, we have to allow pressure to develop us. Here are three ways to build your endurance:

In the 5th Century, Olympic athletes ran naked—yes, I just said naked. They would enter the stadium wearing robes and dropped them at the start of the race. The lack of weight and resistance enabled them to run more efficiently. In the same way, we must drop anything that hinders us from running our race.

What are the relationships, habits, distractions, thoughts, and heart attitudes holding you back from your purpose?

When God challenges us to lay something down, it is always because he has something better for us. Trust him. Drop it now.

Sometimes we postpone running our race because we spend our time dreaming about it, talking about it and even planning about it—but never starting it. At some point, we have to accept the fact we’ll never feel ready, and it will never be the perfect time. There will never be optimum conditions or excessive resources to launch your dream. But now is still the time to start. So quit scrolling through everyone else’s life and de-valuing your own race. Focus on the lane you’re in and start running now.

To consider Jesus who endured, as verse 3 tells us, is to fix our eyes and minds on Jesus. We do that by training our eyes to look away from everything else and focusing on Jesus. We do it by renewing our minds to think God’s word and thoughts rather than letting our minds run wild with everything that pops up. We become what we behold, so we need to focus on him.

For more than 25 years, I have lived this process of building endurance. I have dropped it now, started here now, and looked up now—over and over again, wherever I was on my journey. When I realize I’ve picked up a weight of any kind—anger, unforgiveness, guilt, shame, fear or insecurity—I quickly drop it now. When I realize something is moving too slowly, or I’m tempted to procrastinate, I immediately start here now. When I feel my mind start going down a wrong train of thought, I look up now.

I have endured. When I look around, so many of my friends who started out in ministry with me aren’t there. Somewhere along the way, they dropped out for one reason or another. But I have kept running my race—even when I didn’t know I had it in me to take another step. Even when I have been in over my head surrounded by people who knew more, had more, and could do more. Even when I felt afraid, insecure and unsure. I just kept showing up—I kept enduring—and sometimes that’s the most powerful strategy.

It worked for Jesus. It works for me. It will work for you.

It even worked for Cliff Young.

Persevere to the End

The morning of the race, Cliff showed up wearing the first pair of running shoes he’d ever owned, holes cut in his pants for ventilation, and no teeth. He said his false teeth rattled when he ran. And when he ran, it was more of shuffle—because that’s how he’d always had to run in his rubber boots. Reporters were amused, and race officials were concerned he would keel over at any minute.
When asked if he could run the race, he said, “Yes, I can.”

Not knowing it was customary to stop after 18 hours of running and sleep at least six hours a night, Cliff ran nonstop for the first two days—and then he slept only one hour. No one had ever run the race practically straight through. Cliff never lost his 10-hour lead, and the world became mesmerized by the shuffling potato farmer.

Cliff finished the race in 5 days, 14 hours and 35 minutes—the equivalent of running four marathons a day—shattering the previous record by more than two days. I find it inspiring that he didn’t win because of any particular gift or talent. He didn’t win because of time spent with the greatest trainers in the world. He didn’t win because he was a vegetarian. He won for the same reason you and I will win our race and reach our destiny. Endurance. That hopeful fortitude that perseveres to the end.