Have You Hit A Wall?

I love to run—with friends, alone, on a trail, anytime, anywhere.

I love the challenge and the press of reaching new milestones and levels of exertion, so I know what it’s like to hit a wall. It’s that roadblock moment mid-run that’s actually a form of a collapse of the entire system: body and form, brains and emotion. Your legs feel like concrete, your breathing becomes labored, and you begin to shuffle. It’s where the brain works fine, but the legs up and quit.

When you hit a wall, you have two choices: keep going even though you feel your strides shift into small steps, or give into all the negative thoughts flooding your mind and stop. Your body is responding to the press—and it’s telling you it needs the energy to overcome.

Sometimes, in pursuit of our purpose and destiny, we hit a wall, too. Where once we were full of energy and faith, we suddenly realize we’re not moving forward as fast as we once were. And the wall begins to talk to us night and day: “You cannot get over me, you cannot get around me, you cannot get through me.”

Whatever our wall is, it’s in those moments that we have a critical decision to make. We can cave into discouragement and all the negative thoughts and quit. Or, we can look to the Lord who knows the solutions and how to bring down even the toughest walls.

He proved he can in Joshua 6 when the children of Israel hit the mother of all walls—the walls of Jericho. 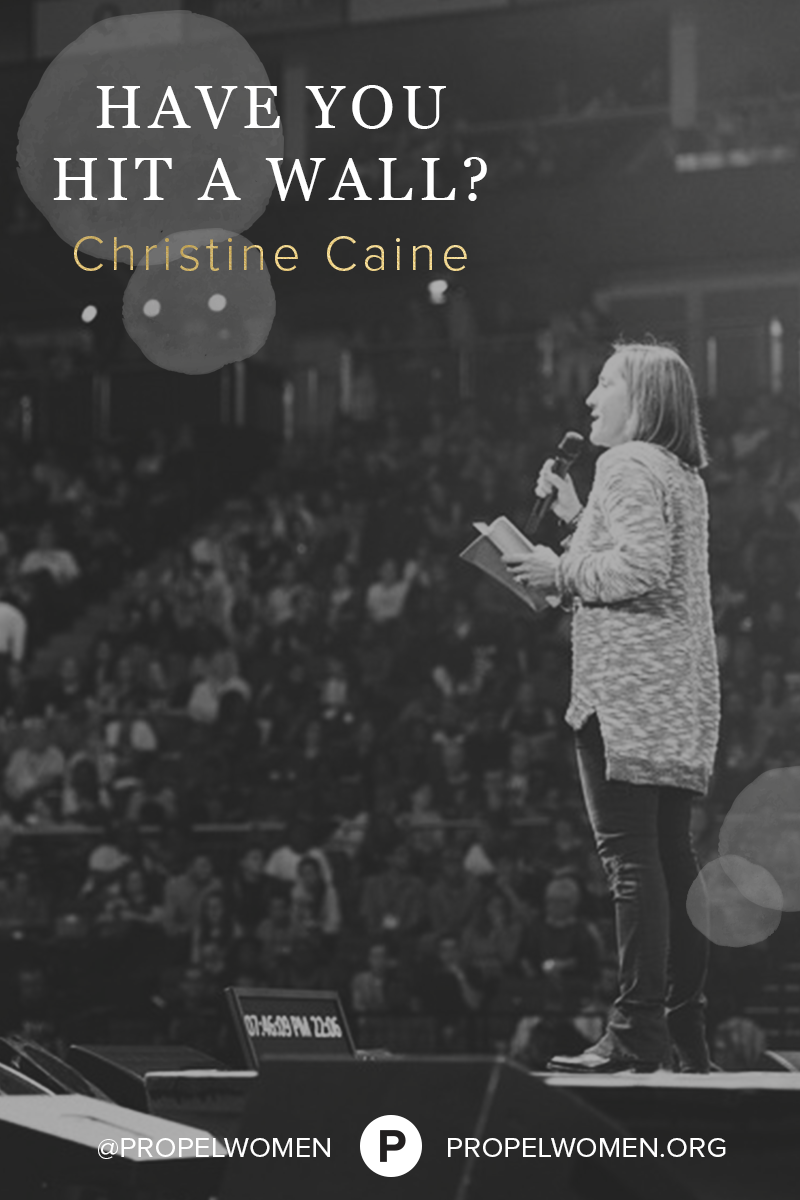 Jericho was a city inside the Promised Land with walls made of heavy, mud bricks—30 feet at its highest, 5 feet at its thickest. And it looked just as impossible to them as your wall does to you.

To bring down the wall, God instructed them to: “March around the city once with all the armed men. Do this for six days. Have seven priests carry trumpets of rams’ horns in front of the ark. On the seventh day, march around the city seven times, with the priests blowing the trumpets. When you hear them sound a long blast on the trumpets, have the whole army give a loud shout; then the wall of the city will collapse and the army will go up, everyone straight in” (Joshua 6:3-5).

And it worked. “By faith, the walls of Jericho fell after the people had marched around them for seven days” (Hebrews 11:30).

God wants your wall to come down as much as you do, but it will require faith—just like it did for the Israelites. When the walls did fall, it was after seven days of preparation—of God working in them and through them.

Let him do the same in you. Let him use these five steps to build your faith and bring down your walls.

Before the children of Israel marched around the city, Joshua was surveilling the walls, and as he looked up, Jesus appeared to him as a man of war (Joshua 5). When Joshua realized who he was, he immediately fell face down in humility and surrender. Like Joshua, look up and see the one who can give you a plan. Then fall face down letting go and giving all the control to God, trusting him.

Jesus will give you a plan, so make sure you’re prepared for unconventional instructions and unconditional obedience. Marching around a city, blowing horns and shouting had no military value, but it worked. I have discovered that strange plans call for strong faith, but we can always trust what God tells us to do.

Even though God promised Jericho would be delivered into their hands, they had to keep walking—they had to take the first step of faith and continue for seven days in silence (Joshua 6:2). Sometimes we have to keep walking in the right order, along the right path, for the right amount of time—even when nothing changes. Like the Israelites, we have to learn patience and diligence—and see the victory by faith before we experience it. God wants us to see his promise to us as bigger than the obstacle we’re facing.

4. Remember God is in your midst.

When the Israelites marched, the priests led the march carrying the Ark of the Covenant which represented the presence of God. Having the Ark out front was God saying, “I am leading the charge.” It was God who made all the difference at Jericho, and it’s God who will make all the difference in your life. It does not matter how big your wall is, God is with you, and no wall is too big for him. He is fighting for you!

With each lap the Israelites took, the walls did not get smaller—but they kept taking laps anyway. So don’t grow weary in your well doing, even when you feel like you’re in a holding pattern (Galatians 6:9). Every lap you make around your walls is strengthening your faith, because there’s power in doing the same thing over and over. It’s the process God uses to build your faith muscles. Even though God tore down the walls at Jericho, the people still had to march, shout and take the city. So keep putting your faith in action and take another lap.

Yes, God could have knocked the walls of Jericho down the first day, but he had a bigger purpose in mind. He wanted the people to grow in their faith, to keep going regardless of how they felt, to look to him to tear down the walls.

And that’s what he wants from you too—even when your stride slows down to a shuffle. So keep going. Keep believing. Keep propelling forward. Your wall is coming down.