Several years ago, a man sped out of a side street and broadsided my car near a busy intersection. Shaken, but grateful that I wasn’t injured, I pulled over to exchange insurance information with him. Rather than following suit, he backed his car up quickly and sped off. I was furious; I didn’t even get a chance to get his license number! I tried to catch him but he drove much too fast for my damaged tire rim. I don’t know what I would have done even if I had caught up with him. I remember thinking, “I wish I had a stun gun or something that would inflict severe pain on him without killing him.”

Avenging a wrong seems to be entrenched in our carnal nature. Sometimes I feel so “un-Christian” because of the delight I get from seeing the bad guys in movies finally get what they deserve—even at the hands of a revengeful vigilante rather than through the established judicial process.  “Some movies bring out the worst in us,” I often lament.

But who doesn’t like to see justice served? Why, it’s the very reason people adore Spiderman, Batman, Superman, Thor, and all the other Superheroes: they make sure the menaces to society get their “just desserts.” Then along comes Jesus, the greatest Superhero of all time. He tells us to forgive an offender and to leave the payback to him. It’s no wonder that Christians and non-Christians struggle with this concept. It is tantamount to a command to run backwards; it simply goes against our natural inclination. That’s why I’m so grateful for the grace of God that motivates and empowers His children to walk in the Spirit so that we will not fulfill the desires of our sinful nature (Galatians 5:16). 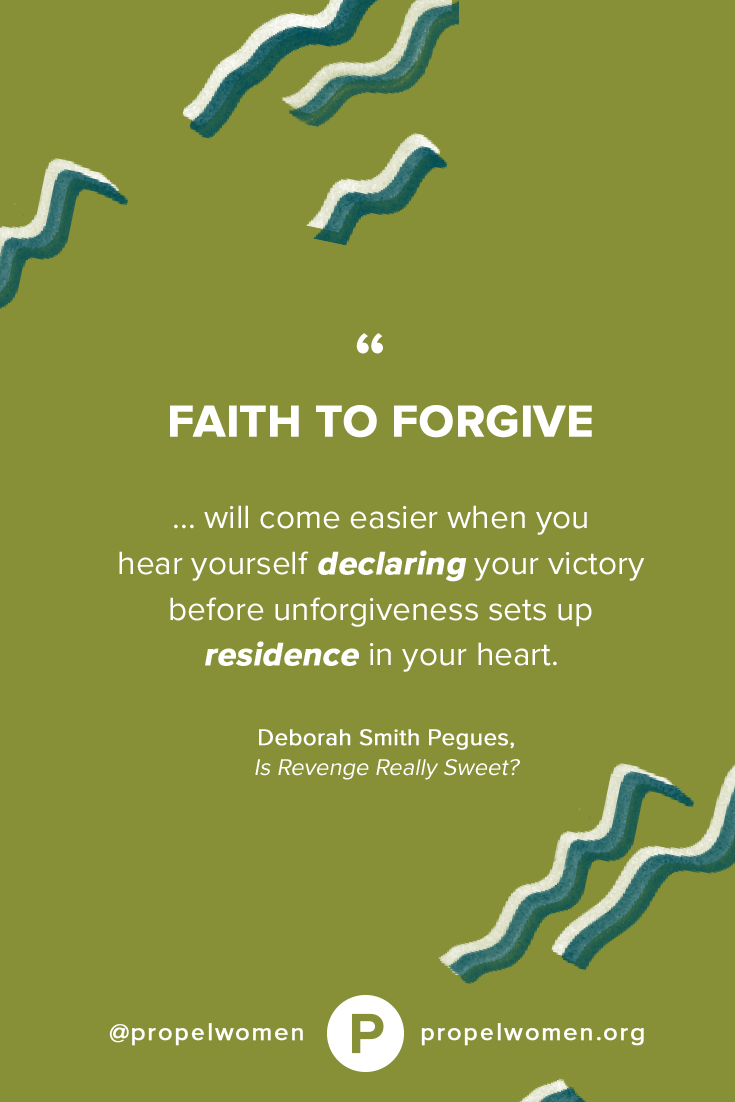 Ironically, when we retaliate--verbally or physically--or attempt to exact revenge in any form, the satisfaction is only fleeting—like when a bad driver cuts you off in traffic and you honk your horn at him in protest. Avenging a wrong just won’t give you the lasting satisfaction, the peace, or the closure you thought it would. It only creates more internal stress.

When a Christian seeks revenge, she is in essence saying, “God, I don’t trust You to avenge the wrong perpetrated against me. I’d better take matters into my own hands.” For those who chose not to retaliate, even their alternative coping strategies often prove ineffective. For example, many mental health professionals recommend certain exercises such as writing a letter to the offender, letting all the anger out but not mailing it, or cutting up the offender’s photo and flushing it down the toilet. I prefer the strategy set forth in 2 Corinthian 10:5: “Casting down imaginations, and every high thing that exalteth itself against the knowledge of God, and bringing into captivity every thought to the obedience of Christ.” I believe in calling upon the Holy Spirit to help me cast down every thought of retaliation because such thinking “rises up” against what the word of God says about His promise to avenge every wrong. Yes, I realize even the thought of revenge can bring some temporary satisfaction, but why luxuriate in thoughts that are contrary to God’s will and His way?

To triumph over vengeful thoughts, always stop and think through the consequences of your proposed actions and consider positive alternatives.  Ask yourself:
• What will this action cost me personally (potential job loss, jail time, loss of certain relationship(s), loss of respect, etc.?
• What impact will it have on those who love me (heartbreak, embarrassment, disappointment, loss of social standing?
• Will it undo the damage done by the perpetrator (Nope!)?
• Is there an opportunity for me to achieve justice under the law? (Be honest here. Is justice your true objective, or are you driven by anger and a need to see the offender suffer pain? Get real about your motivation.
• Do I have all the facts surrounding this situation, or should I wait to obtain more information directly from the offender or witnesses?
• Is there any way I can respond to this hurt that will have a long-term positive impact such as voicing my forgiveness, speaking out against certain crimes, working to change laws, starting a non-profit organization (for example, the powerful organization, M.A.D.D. (Mothers Against Drunk Drivers (www.madd.org) was borne out of pain over the loss of loved ones at the hands of drunken drivers).

You are now probably thinking, This is all easier said than done. I totally agree with you; that’s why I suggest starting with the easy part: Say it!  Always state your intention to forgive. Declare immediately when you have been wronged, “I release this offense.”  Don’t rehearse it or nurse it; just declare it. Faith to forgive will come easier when you hear yourself declaring your victory before unforgiveness sets up residence in your heart.

Carrying out revenge brings little satisfaction and will most likely create more problems and suffering. So, stop, think, and pray before you act. And always remember that vengeance belongs to God. Don’t dare take his job!

Deborah Smith Pegues is the TV Host of “Winning with Deborah” a faith-based, how-to program on the TBN SALSA Network, a global speaker, CPA/MBA, and bestselling author of 16 books including 30 Days to Taming Your Tongue (over a million copies sold). She resides in Southern California. Connect with her at ConfrontingIssues.com.