Brennan Manning, in his book Ruthless Trust, completely changed how I viewed my own failings in light of the gospel: “Wallowing in shame, remorse, self-hatred, and guilt over real or imagined failings in our past lives betrays a distrust in the love of God. It shows that we have not accepted the acceptance of Jesus Christ and thus have rejected the total sufficiency of his redeeming work. Preoccupation with our past sins, present weaknesses, and character defects gets our emotions churning in self-destructive ways, closes us within the mighty citadel of self, and preempts the presence of a compassionate God.”

Isn’t that said so beautifully? When we truly accept the total redeeming work of Jesus, we have no choice but to decide we are going to stop beating ourselves up.

Because we will all fail. This is a reality of living on this planet. We all fail and will continue to fail. What matters is how we respond to our failure. We can choose to believe that Jesus can rewrite our stories and use our failure for his good (and ours), or we can become stuck in a cycle of failure.

A perfect example of this is the woman at the well. 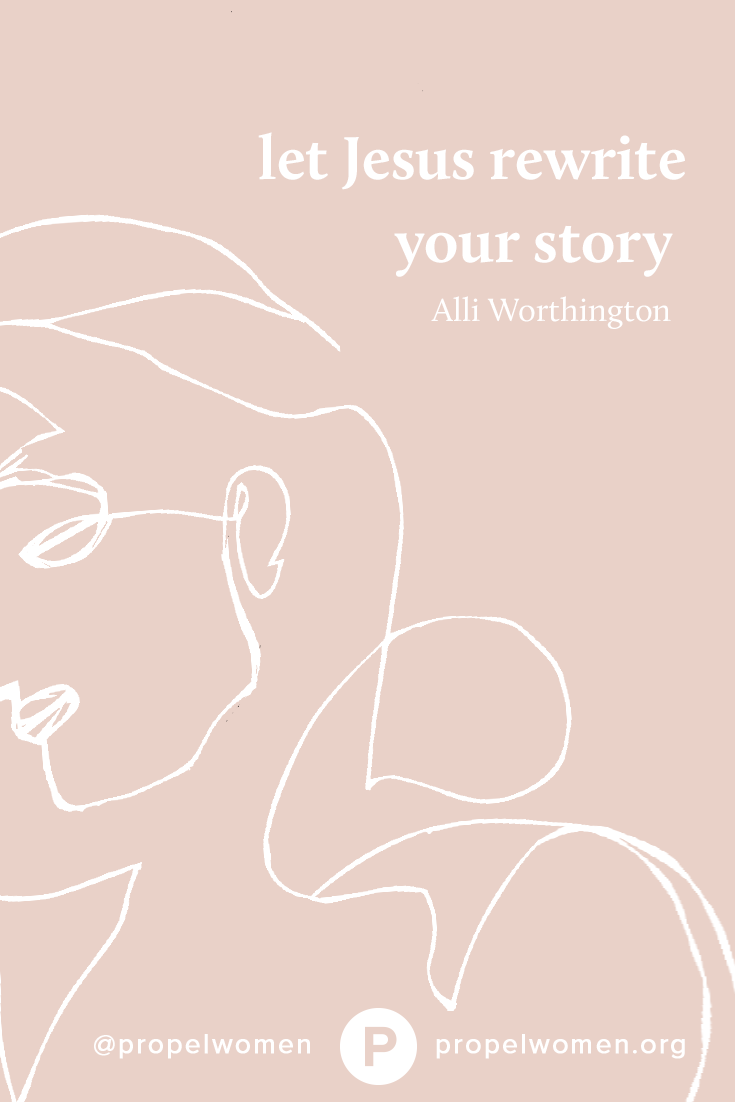 The woman at the well feared that her life was colored by such failure that she could never rise above it.

But then Jesus showed her differently.

He knew her stories and her pain and offered her life and a future.

He addressed her failed relationships, but what he really wanted to do was show her that she had a bigger purpose in the kingdom despite her failure. And she believed him. So she left her water jar behind, went back to her town, and said to the people, “Come, see a man who told me everything I ever did. Could this be the Messiah?” (John 4:29). And what happened next? Did they blow her off? Did they say, “What do you know? You’re not even married!” No. They all came out to meet Jesus.

“Yes, you had five husbands and are living with someone outside of marriage. So what? It doesn’t have to be your story. How would you like to lead people to eternal life?”

In the same way, he speaks truth over you and me today.

•  “Yes, your marriage fell apart. So what? It doesn’t have to be your story.”

You can choose to believe the truth that Jesus has a purpose for you beyond your failure and allow him to rewrite your story.

Our futures are already claimed by God; we don’t have to stay stuck in a cycle of fear and failure.

Failure doesn’t have to be your story.

Jesus is still writing your story.

We know that the good work he has begun in us, he will finish. And Jesus is enough. Jesus is there at the finish line. Because Jesus is the goal!

Alli Worthington is a mom of five sons, wife to Mark, and the Executive Director of Propel Women. She is also the author of Breaking Busy: How to Find Peace and Purpose in a World of Crazy.

(This is an excerpt from Fierce Faith: A Woman’s Guide to Fighting Fear, Wrestling Worry, and Overcoming Anxiety.)