Living As Christian Brothers & Sisters in a Sex-Crazed World

Adam and Bronwyn, sitting in a tree, k-i-s-s-i-n-g,
First comes love, then comes marriage,
Then comes baby in a baby carriage.

It starts early and it’s everywhere: the idea that any boy and any girl showing each other attention will lead to all that k-i-s-s-i-n-g stuff. I was one of a throng of six-year-olds signing this song to my friends, even though I blushed when it was sung of me. Adam and I were skipping hand in hand, as six-year-olds sometimes do. No big deal. But the schoolyard ditty suggested it was maybe a bigger deal than we realized. No matter how much we protested that we were just skipping, the teasing continued. The awkwardness grew, until one day it didn’t seem worth it to skip together anymore.

Which was a pity. I liked skipping. I think he did too.

It’s been many years since I skipped with Adam. In the meantime, I k-i-s-s-e-d another boy, fell in love, got married, and we’ve had three babies in baby carriages. But even though I’m grown and married, there’s still some worry about how simple activities like just talking or just texting or just laughing can turn innocent interactions with men into things that others read all sorts of subtext into. Even in church situations, the awkwardness between men and women worrying whether their friendliness might be misunderstood to “mean something” can grow, to the point that for many women, it just doesn’t seem worth it to maintain any friendships with men. 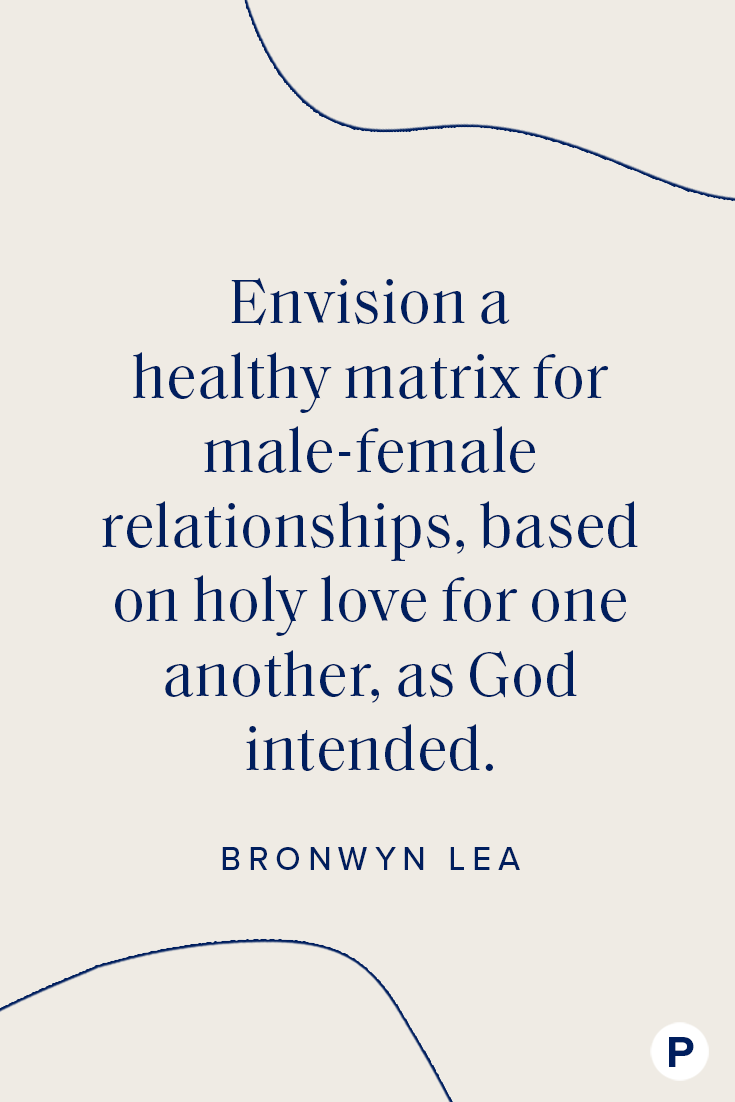 Just in case it goes wrong.

Which is a pity. Because I like community. And I think men do, too.

The challenge we face, though, is that we live in a sex-crazed world. People read sexual innuendo into just about everything. The boy-meets-girl plot with its promise or threat of sexual chemistry has found its way into the music we listen to, the books we read, and TV and movies we watch, and the dreams we dream for our lives. And Christians are not exempt from this way of thinking: when we’re young and single, we’re taught to scan the men out there to find “the one”. And once we’re married, we’re warned against the men out there who might be “temptations”. But both those scenarios buy into the same fundamental premise: that whenever you put a man and a woman in the same space, sexual sparks will follow. It’s just a matter of time.

And if that premise is true, surely the wise thing to do is to keep our distance from men. To not talk, not text, not befriend, and definitely not skip with men-not-your husband.

Except, it’s not true.

It’s not true, and I know because at this point in my life I have met literally thousands of men I have zero intention of ever kissing or being kissed by. I’ve met interesting men, kind men, men who have been mentors, men who have been my students, fellow dads at school, and co-workers at the office. I have appreciated them, enjoyed their company, and learned from them – and sexual chemistry just hasn’t been an issue. (In truth, there have been some I’ve felt some kind of “spark” with; in those situations, wisdom calls me to greater accountability, self-scrutiny, and discernment to guard my heart).

But the bigger reason I know it’s not true is that the Bible has a much bigger story of what it means to be men and women interacting than the boy-meets-girl-and-sex-follows story. Yes, God made sex and sexuality, and He delights and rejoices in it, as Song of Songs tells us. But from the beginning God made us male and female, in his image, and we are called to relate as brothers and sisters (which are intrinsically gendered relationships) as we grow in the brotherly (and sisterly) love God has called his family to show one another (John 13:34-35).

It’s a thrilling, wonderful, exciting thing to be part of God’s family, knitted together in love as brothers and sisters. The problem is: we live in a world which reads sexual tension into situations which should be governed by sibling traction. We’re supposed to be bonded to the men and women around us by love-bonds like 1 Corinthians 13 describes, without that needing to hint at the sex-bonds that only belong between husbands and wives.

How can we envision a healthy matrix for male-female relationships, based on holy love for one another, as God intended? The answer lies in rediscovering our identity in the family of God. The men in my church are not “affairs waiting to happen” as much as brothers waiting to be welcomed. And it’s up to us to live as the holiest, best sisters a brother could hope for.

Bronwyn Lea is the author of Beyond Awkward Side Hugs: Living as Christian Brothers and Sisters in a Sex-Crazed World, and the editorial curator of Propel Sophia. Born in South Africa and now pastoring in her local church in Northern California,  she lives with her husband and three kids who have long outgrown baby carriages. Follow her on Facebook, Twitter, and Instagram, and sign up for her monthly-ish newsletter of favorite things here.