Producing in a Consumer World

Each summer was marked with the anticipated drive down Interstate 80 headed out of town towards the beach. I drove with Dad who opted to take the longer route as the goal was always to avoid Bay Area traffic. A very uneventful drive until around mile 147 when you notice the potent smell of garlic.

“Whaaaat is that smell?!” I screeched at my Dad the first time I remember the drive.

“That’s garlic, honey. We’re in Gilroy—a little town where most of the garlic we eat is grown.” He continued, “Don’t worry, in about 20 minutes we’ll be in Watsonville. It doesn’t smell and Watsonville is a town famous for growing all of the berries you love to eat.”

Dad wasn’t kidding and within 20 minutes we were passing farmland that produces roughly $2 billion of the nation’s berry market (and smells a lot better). Since we arrived home from that family vacation my perspective of how I consumed what I ate had changed. I knew where it was produced. 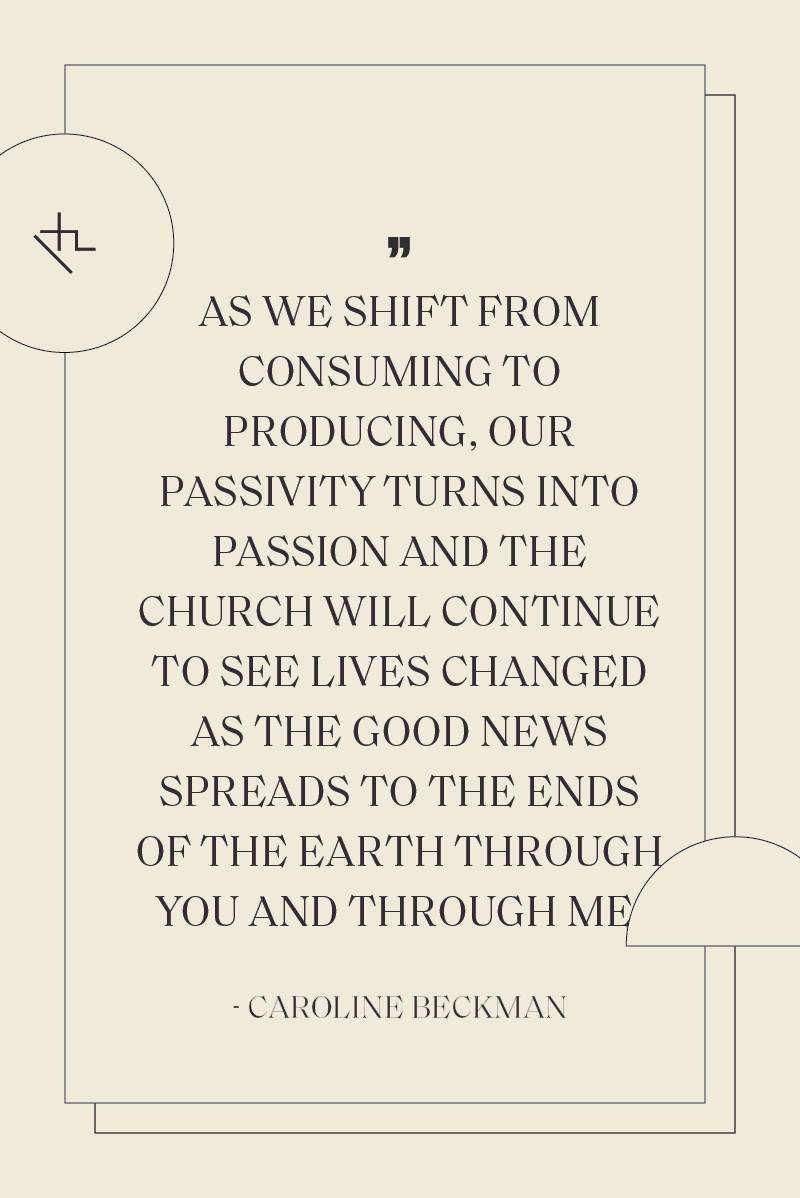 California is one of the most productive states in the United States. Dominating in six industries: agriculture, government, technology, tourism, entertainment, and ports, California is the most resource-laden piece of property in the world. Combine those resources with an entrepreneurial spirit, and this state became a producer’s paradise. Yet over time, California became increasingly crowded and eventually created consumers out of us. Productivity growth in the United States, which is powered by innovation, is lower now than it was 100 years ago.

We are a culture that buys things to quench the inherent yearning we have to know God. The percentage of consumer spending on non-essential goods has risen from 20% in 1900 to 50% in 2000. Consumer spending is now 70% of GDP.

Corporate focus has transitioned from creating solutions that help people “innovate” to selling image management “marketing”. By 2015, total investment in research and development had fallen to about half of what it was in the late 1950s. Meanwhile, marketing and advertising dollars are expected to hit $390 Billion in 2020.

Eugene Peterson prophetically warned the church in 1983 when he said, “The huge irony is that the more the gospel is offered in consumer terms, the more the consumers are disappointed.” Nearly 40 years after these words were written our consumer culture has postured the church with the most wonderful opportunity we have ever had – to produce. Innovators and producers solve, create and lead; consumers take, use, and follow.

In the first and the third centuries, there were two great pandemics within the Roman Empire: the Antonine Plague and the Plague of Justinian. Millions of people died and, in both instances, the people of Rome started fleeing the urban areas as there was low understanding about how the virus was spread. Christians, on the other hand, moved towards the sick, the dying and the pain. The church moved into the urban areas to care for the victims of the pandemic. In these pandemics and in the showing of hospitality, the church created the concept of the hospital. As they found solutions, the church birthed tremendous innovation. Academics, governments, and businesses didn’t invent the hospital.

While consumers are fraught with fear and run from the problem, the producer confidently runs to the problem. The character of a producer is not constructed or dictated by multiplication or a crowd. This type of character is created out of the public eye, in the small hours of the morning, and in the often lonely place of running toward the problem. Over time, three key attributes form a layer of resilient wisdom in the heart of a producer: a clear identity, discernment, and confidence.

Perhaps the most important character trait of producers is discernment. The consumer mindset ostensibly leads us to believe that our favorite fruits are ripe all year round, when in reality they are not. In fact, the industry of “Consumer Packaged Goods” emerged to create and control the “perfect” delivery of a product all year around. The trouble of this type of consumerism, spiritually speaking, is that you can lose discernment over the seasons. Strength in identity is important to discern the difference between a producer and consumer mentality.

For us, to produce in a world governed by consumers will require an unwavering confidence. The future of innovation relies on the assurance of things hoped for and the conviction of things not seen. Hebrews 11:1 (TPT) says, “Now faith brings our hopes into reality and becomes the foundation needed to acquire the things we long for”. Clinging to this will help us avoid settling for the consumerism that unbelief brings.

Today’s majority is exhausted. They have been tossed around in a culture that elevates  the consumer, celebrating opinion over action. This leads me to appreciate Eugene Peterson’s question in Run with the Horses: “We cannot avoid being in crowds. Can we keep from being crowd-conditioned? Can we keep from trading our name in for a number, from letting the crowd reduce us to mindless passivity?”.

I believe the answer to Eugene’s question is YES. Fasting from social media and media in general, and backfilling with God’s Word for a season or even a sabbath will certainly catalyze a reset.

With a clear identity, discernment, and confidence we can shift from consuming to producing. And as we do, life will be marked with wonder, awe, challenge, delight, and purpose here on earth. As we shift from consuming to producing, our passivity turns into passion and the Church will continue to see lives changed as The Good News spreads to the ends of the earth through you and through me.

Caroline Beckman is an entrepreneur who began her career in the health industry during her teenage years. She has founded, advised and invested in over 10 food, beverage, technology and sustainable resource companies. Each venture has worked with leading retail partners such as Whole Foods, Target, Costco, Kroger, and more. Caroline is currently Founder and CEO of Nouri, a gut and immune health solutions company. Nouri and the Nouri Foundation are focused on building proactive solutions that educate consumers and close the health and wellness gaps for marginalized communities.