purposeful in every single season

We watched her on the couch, staring at a movie on the computer screen. She was wrapped up in a blanket and engrossed in the cartoon, oblivious to what we were whispering about. We were crouched down behind the kitchen island discussing the future.

Daisy was about to die.

She was only 8. She had been fighting for her life the last 3 ½ years, and the fight was coming to an end. She was the loser, or rather, I was. She was about to see Jesus face to face, and I was about to be left behind with empty arms.

There in the kitchen, I was having an identity crisis. I asked my husband what I was going to do without her, my reason for living. I had spent every waking moment trying to save her life. Everything I did was dedicated to her. And I realized that when her body gave out, my identity as her mom would go up in flames.

“You still have Isaiah,” Britt whispered, never taking his eyes off her.

“He’s 12. It’s different, he doesn’t need me like he used to. And he’s practically out of the house,” I whispered with a fresh stifled sob.

Since the day I had peed on that stick and found out I was a mom, I fell into the role seamlessly. I relished every second with my babies, happily staying home to be with them baking muffins or spending our days at the beach. I gladly gave up teaching and made my children my professional priority.

My identity over the years had become deeply settled into motherhood, and that was about to be ripped from me. I couldn’t handle it. 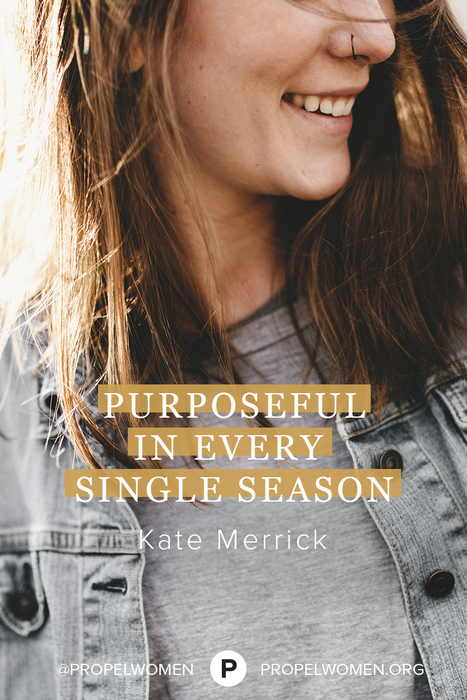 The months following her death were almost like being underwater. My hearing was obscured and I saw only vague, murky outlines. My feet dragged, and I couldn’t feel comfortable in my own skin. I just didn’t feel like I belonged anymore. To whom or what, I couldn’t put my finger on, but there was a general empty feeling I carried with me.

Grief is one thing, and it is to be travelled with bare feet, feeling each step. But aside from that, in my identity, I was stuck.

I was trying to hold onto something that was gone from me, something that wouldn’t come back. I was holding that season of my life, of littles and backyard butterflies and finger painting and boo-boo kissing, and making it an idol. It was held up high, just out of reach. I couldn’t grab onto anything resembling my old life, which left me one of those crusty, stuck people who sits around in bars and coffee shops talking about the good old days.

But worse than the emotional pain and disjointed feeling I wore daily, was the fact that I was missing out on something more important. The fact that life is lived in seasons, all the seasons are beautiful, and all have purpose.

Jesus came to give abundant life, not just when things go my way. Does that make sense? I realized I was waiting for something that would never come, and that made me miss what I had.

We all know that girl, and everyone can see it but her. Maybe the tired mom is complaining to a single woman about her lack of sleep, when the single woman would shed blood for the chance to have a child. Or maybe the single girl is complaining about her busy schedule while the homeschool mom wishes she could just for one day get out of the house and move mountains too.

I experienced that following Daisy’s passing. A friend would complain about her daughter, and I would think “I have an extra bedroom and a lot of love to give,” while gritting my teeth. “I’ll take her off your hands.”

Let’s think for a minute: What if there weren’t seasons of our lives? If children never grew up, if we never made a career change, if we never did things any differently—we would miss out on a mess of good things. Let’s quit hanging on to what we wish was and really grab onto what is. Let’s revisit our deepest identity and put it in a healthy place.

Whether you are wearing the identity badge of manager, mother, innovator, speaker, wife, or preacher, and something happens in your life that changes your circumstances, if that shatters your identity then it was in the wrong thing.

I miss Daisy something fierce. But I refuse to miss the beauty of each season.

These are new days and I’m still here and still loved and used by God.

Your identity and my identity is something stronger, deeper, more unshakeable than our circumstances. It cannot be taken from us, it does not depend on what we do. We don’t need to fear change, nor do we need to hang on to old times. We are children of God, chosen of the Lord, purposeful in every single season.

Kate Merrick is an author, speaker, pastor’s wife, mama, part-time cowgirl, and self-proclaimed chicken whisperer. She lives in Carpinteria, California, where she and her husband founded the Reality family of churches. You won’t find her on social media, but you will at KMerrick.com. This year she released her first book, And Still She Laughs: Defiant Joy in the Depths of Suffering.