I hate to bring the bad news, but a clock striking midnight on December 31 won’t change your circumstances. It may give you a sweet dopamine release and a belief in yourself for the next forty-eight hours, but it won’t necessarily mean everything will be different when you arrive in a new year.

Just because a new calendar shows up doesn’t mean the things that hurt you last year won’t come back around this year. A resolution won’t cover whatever broke last year—it will still be there, and it will still quite likely demand to be felt.

At the beginning of a new year, I usually pick a word I want to represent the twelve months ahead. It’s become a more meaningful practice to me than setting goals.

I’ve had all kinds of words in the last few years: Strong. Home. Joy. Freedom. But on this particular year, I found myself reading the book of Jeremiah in the Bible when I came across a line that surprised me:

“The city will be rebuilt on her ruins.”

Just that line. I’d never noticed it before.

That line comes up in verse 18 of chapter 30 in Jeremiah’s book. To know the writer Jeremiah is to know that God downloaded a lot of good stuff into his heart so he could go and tell others. He was a prophet. He saw things before they happened. 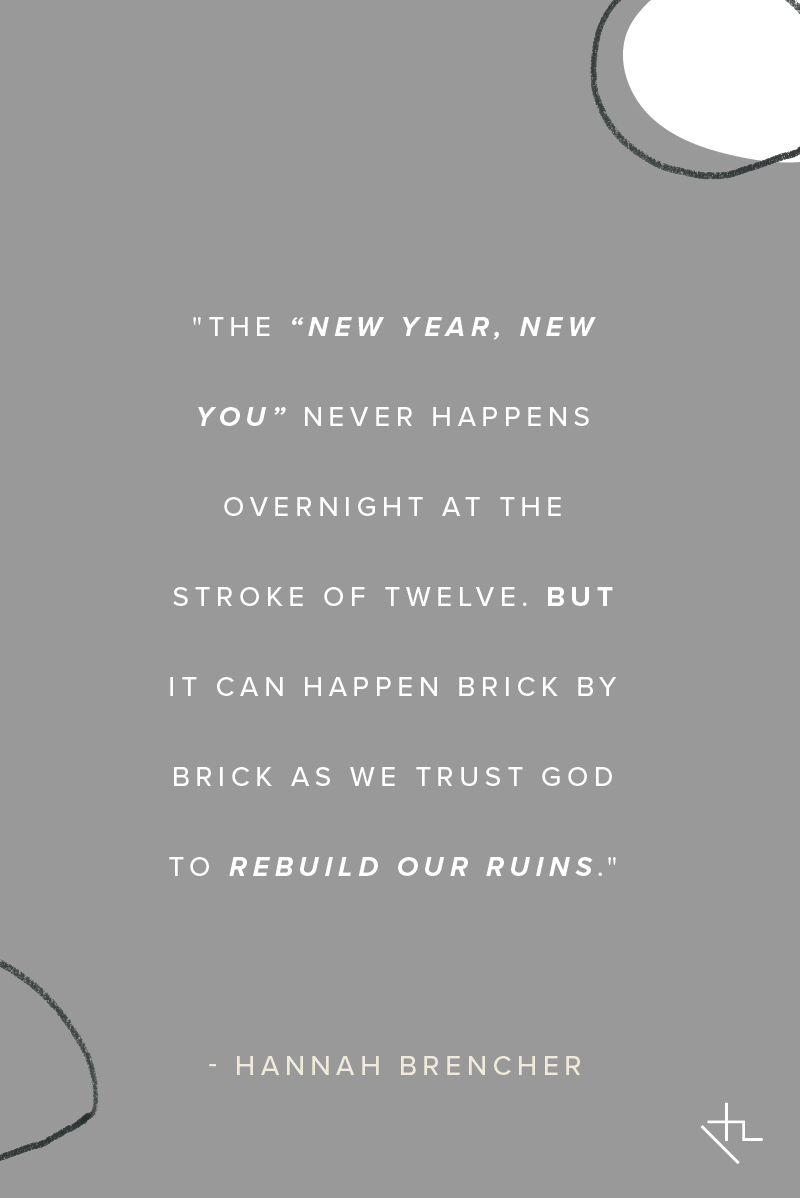 At this point in the story, Jeremiah was giving the Israelites some hope that there would be healing and rebuilding in their land after a long stretch of ruins. He was declaring that every level of society would be renewed in the coming days, that people would live in towns built on mounds of rubble.

This is where I have to pause and scratch my head. Like, Did you really mean to do this, God? Did you really mean to rebuild on top of a mess? This is not what I think happens to the ruins in my own story. I do not look at the ugly mounds or pieces of scrap metal and see something to build on. I see something worth hiding away and covering up. But to know God is to know he wants your best. Day after day, he wants the most unscripted and unedited version of you. He can always work with that.

Even though I believe this statement exactly 82 percent of the time, I am still the one who tries frantically to clear the junk away on my own. Like, if God were making house visits, I would be the one piling all the ugly unseen junk into the upstairs closet, thinking to myself, It will be safe and concealed here.

I picture God strolling into the house and taking a look around. He doesn’t admire what I want him to admire. He doesn’t survey the sturdiness of the IKEA barstools or drool over the chandelier. He simply says, “Can I see the closet?”

I protest. I start to freak out. I panic, thinking, You cannot handle my mess, the things I’ve hidden there.

But God in his character is kind and calm as he tells me, “What I will not do is discount your ruins. I want all of you—even the stuff you hid in the guest bedroom closet. I am not throwing away the parts of your story that left you feeling crumbled and defeated. You don’t have to hide those parts. Let’s use them.”

And with that, God does exactly what that verse in Jeremiah says. He rebuilds a city on top of what once ruined us.

There are going to be broken times when you feel as if everything is under demolition. When things feel unresolved or ruined inside of you. When the only thing you might have the strength to do is three-quarters-of-the-way trust that God will take the broken pieces and glue them back together.

The “new year, new you” never happens overnight at the stroke of twelve. But it can happen brick by brick as we trust God to rebuild our ruins.

Because here’s the truth: God uses all the pieces. Every little thing. Nothing is wasted. Even when he builds the new in us, he is reaching back to use the old. A few months ago, I was digging deep into Isaiah 43:19—the part where God leans in and says, “Don’t look back. I’m doing a new thing.” The phrase “new thing” in the Hebrew is chadash. It means fresh and new (not surprisingly). But if you look even closer, you will learn that the root of this word means “to rebuild, renew, repair.” The prefix re means “again and again and again.” So God is saying to us, “I’m not discounting what you’ve walked through. I am using the stories you swore would discount you, and I am piecing them together to bring you to something new.”

Over the parts of our stories we want to white out or forget for good, God says, “Hey, I see what you’ve been through. I’m renewing that. I’m renewing you. Again and again and again. I am taking all the broken pieces and rebuilding you on what you thought would destroy you.”

Hannah is the author of Fighting Forward, a blogger, TED speaker and entrepreneur. She founded The World Needs More Love Letters, a global community dedicated to sending letter bundles to those who need encouragement. Find Hannah at hannahbrencher.com.