I slowed down as the red light approached. I made sure to stop a few inches before I reached the front window of the car next to me, that way the driver wouldn't see the angry tears that had finally forced their way down my face after a long day of fighting them off.

I wasn't supposed to be feeling this way. A few weeks prior, God broke some major chains by drastically changing circumstances that truly flattened me. It was a huge victory and mile-marker in my walk with Him because it was the first time I had been brave enough to stand up to a specific type of fear that had controlled me for a very long time.

I chose to step out in faith and risk everything by saying "no more" to someone who was using that fear as a control mechanism. God fought for me, and the end result was nothing short of His work on display.

So why did I feel like I was struggling with this same fear, perhaps even more so than when it was physically present? Why did I feel so suffocated by something that was gone? Everyone else saw it as freedom for me. Everyone else thought life was "back to normal,” viewing me as someone who had just been rescued from a year long struggle. So why wasn't I that person?

The victory I had felt for a few short weeks escaped with the tears that day in my car.

I trusted you God. You said move and I moved. You told me to stand up and I did. You fought for me then, where are you now? 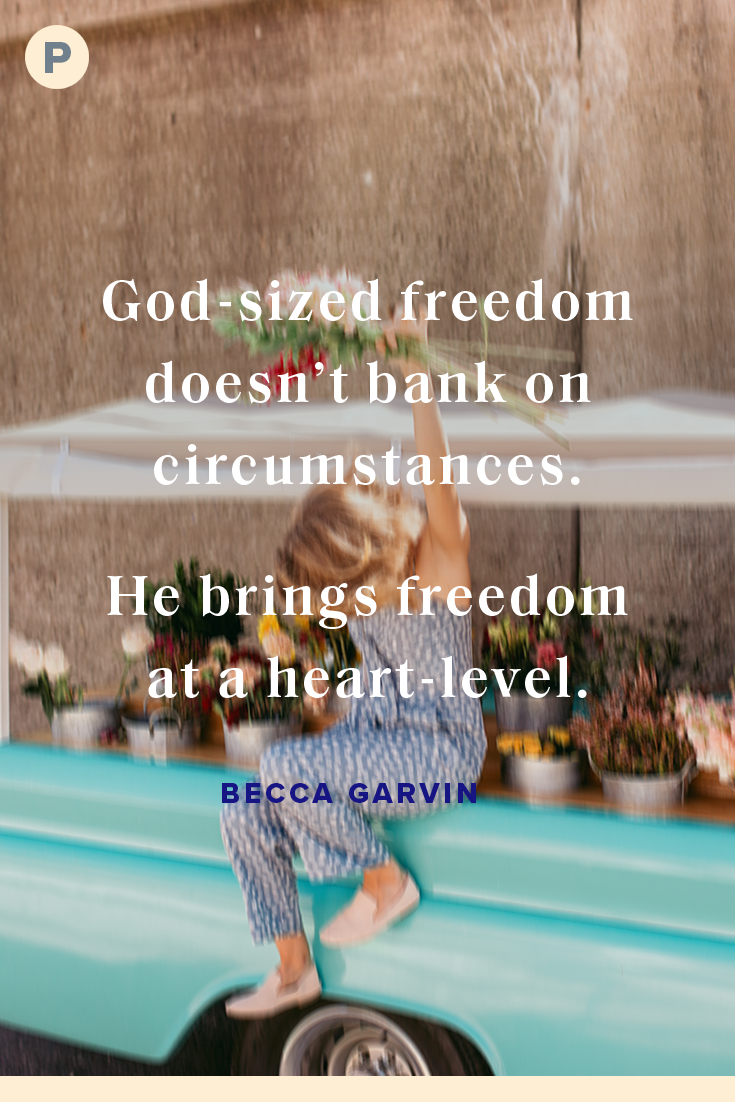 I had been so sure this particular hurdle would be in the rearview mirror along with its most recent ambassador. But that was the problem. I saw victory as tangible and defined freedom by feelings, when in reality God-sized freedom doesn't bank on circumstances. He brings freedom at a heart-level.

“God-sized freedom doesn't bank on circumstances. He brings freedom at a heart-level.”

I did fight for you and I am fighting for you. I did rescue you and I will continue to. Just because your circumstances changed does not mean you need me any less. Regardless of anything else, you are free when you are walking with me, and only then.

His response gently replayed over and over in my mind and eventually my heart was open to the peace it guaranteed.

You see, victory wasn’t just in the removal of a circumstance. The true mile-marker was surrender of something that held me captive, which then enabled me to depend even more on Him than ever before.

The evidence of God-sized victory lies in recognizing His supernatural power. Sometimes this is tangible and we can see it, other times it’s something He reveals through our continued choice to cling to Him.

God's victory isn't like this worlds’ victory, it's much bigger and sweeter - so much so that it often requires faith to recognize it; looking to the Victor instead of through the lens of circumstances. If freedom is found IN HIM, it makes sense that abiding in Him, and only Him, sustains it. (Galatians 5:1, 1 Corinthians 13:12)

Struggles may not feel like they are gone all the time, even when it seems they should be, but we can rest in the hope that feelings do not define God’s character nor the work He has done and is doing in our lives.

At first glance this might seem like a hard concept to grasp, but when we experience the results of stepping out in faith and trusting that He is Who He says He is, a deep form of clarity confronts doubt.

So, how can we practically go about this? Thankfully our responses do not have to equal the complexity of Jesus’ work in us. I believe it is simple on our part:

•  Keep reading your Bible.
•  Ask Him to show more of Himself and His freedom.
•  Repeat His promises over and over, even when they seem to be the opposite of what you are seeing.

These promises are not always felt by our human nature nor understood by our limited understanding. BUT- if we act on them and walk by faith, not by sight- I believe we will experience a freedom deeper than a circumstantial one defined by feelings. (2 Corinthians 4:18)

As for the story I shared above, circumstances come and go. I have felt peace and I have felt fear. There have been moments of joy and some painful ones as well. But let me tell you this, the heart-level freedom that has been and is being cultivated in me is one I can’t really explain. Because, it’s so supernatural and too powerful for me to even understand. It takes over from the inside out and fights things I would never be able to do on my own.

I believe in His power that lives inside of you, friend. Cling to it and watch His promises come to life.

Further Reading:
– “Now we see things imperfectly, like puzzling reflections in a mirror, but then we will see everything with perfect clarity. All that I know now is partial and incomplete, but then I will know everything completely, just as God now knows me completely.” 1 Corinthians 13:12 (NLT)
– "For freedom Christ has set us free; stand firm therefore, and do not submit again to a yoke of slavery." Galatians 5:1 (NIV)
– “For we live by believing and not by seeing.” 2 Corinthians 5:7 (NLT)
– So we fix our eyes not on what is seen, but on what is unseen. For what is seen is temporary, but what is unseen is eternal. 2 Corinthians 4:18 (NIV)