You probably know the feeling well. Your friend gets the thing you’ve been working for—the promotion, the book deal, the attention, the acclaim—and as soon as you hear the news, it’s like suddenly being hit with the flu.

Your mouth goes dry, your stomach sours, your heart rates races, your entire body is in knots. You want to be happy for her, but you also want to throw up.

I’ve been there. Probably more times than I can count. It’s tough to celebrate another person’s success when it stands in contrast with your own. Instead of rejoicing with your co-worker or peer, your mind is flooded with questions of fairness and “why not me?” In the darker moments, you might secretly accuse her of “not deserving it.”

As much as we wish it weren’t true, women can be competitive. This is especially the case in fields where women are few, such as math and science careers, or leadership positions.

Studies show that when women are outnumbered by men, they can become one another’s harshest critics, instead of their greatest allies. The same dynamic is at play whenever we see a successful woman on tv, and immediately pick apart her appearance. All too often, women devour their own.

In contrast with this “survival of the fittest” approach to womanhood is a new idea called Shine Theory. Journalist Ann Friedman coined the phrase as a response to competitive womanhood. 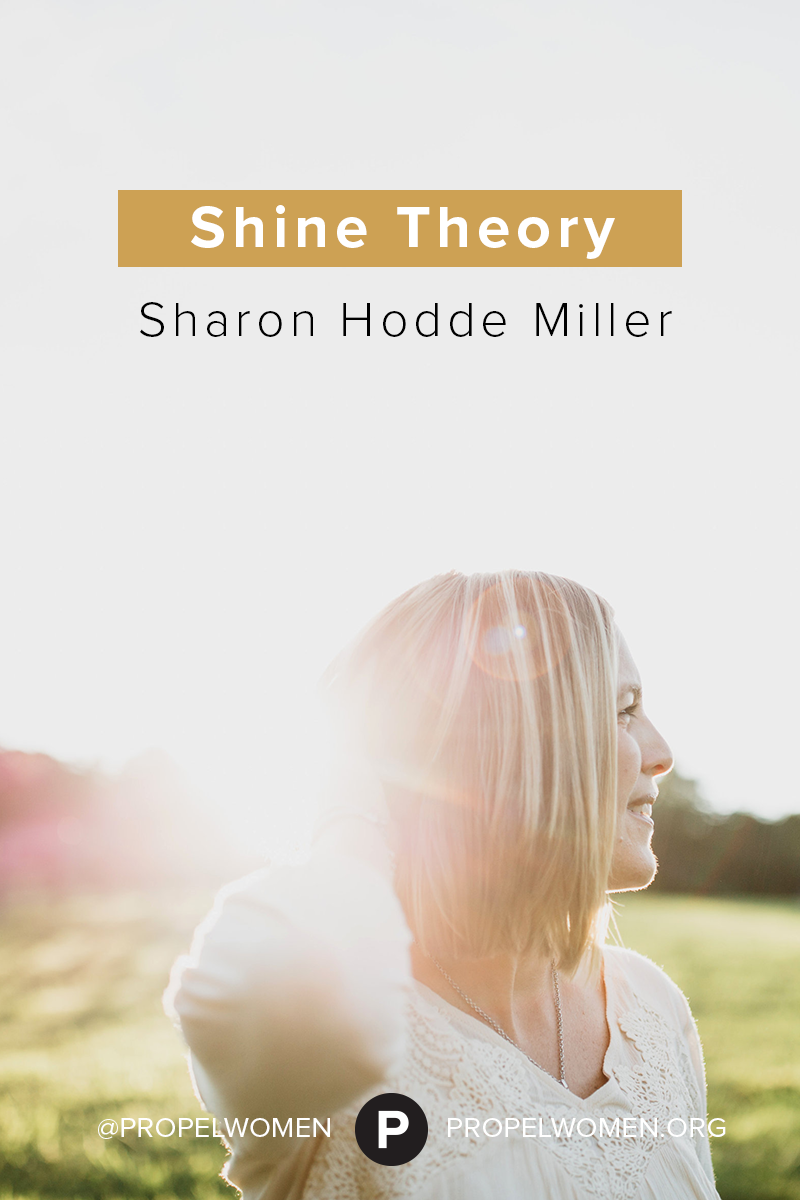 She writes, “When we meet women who seem happier, more successful, and more confident than we are, it’s all too easy to hate them for it. It means there’s less for us.” Friedman felt personally crushed by the pressure, so she offered an alternative that she described this way:

“Here’s my solution: When you meet a woman who is intimidatingly witty, stylish, beautiful, and professionally accomplished, befriend her. Surrounding yourself with the best people doesn’t make you look worse by comparison. It makes you better.”

In short, I shine when you shine.

For Friedman, this isn’t simply about shining on the women you admire who are already successful. It means investing in other women, celebrating their successes, and elevating “lesser-known voices.”

Ever since I first learned about Shine Theory, I now see it everywhere. One of my favorite examples of Shine Theory is podcasts. Podcast interviews are designed to spotlight guests, but they have the effect of spotlighting the interviewer too. Another example is guest blogs. When you share your platform to elevate others, you both shine.

Shine Theory plays out in smaller ways too, such as the quiet choice to promote another’s accomplishment, even when it stings. But no matter the scale of the “shine,” there are two reasons why this is such an important practice for Christian women:

First, this is our witness. In a world of competitive womanhood, this is how we can be distinct. It’s how the world will “know us by our love” (John 13:35), but it is also how we testify to the abundance of God. God never runs out of provision, and He doesn’t create us without a spot to fill. Scarcity is not a thing in the Kingdom of God, and we witness to this truth whenever we treat God’s blessings as though they will never run out.

Second, shine theory is an opportunity to die to self. Sometimes it really is painful to celebrate another person’s win. Despair nips at our heels as we wonder if our time will ever come. However, Shine Theory reminds us that we are not the center of the story, and neither are our successful peers. Everything we do is for God and about God, and Shine Theory disciplines our hearts and minds to live into that vision, by taking the focus off ourselves.

Wherever you are, whatever your calling, and however you hope to pursue it, look to the women around you. Not just ahead of you, not just beside you, but behind you too. Who are the women on whom you can shine? Who are the women you can lift up? How can you resist competitive womanhood, and proclaim a different way? In Philippians 2:3, Paul writes, “Do nothing from selfish ambition or conceit, but in humility count others more significant than yourselves.” This, Paul adds, is “the mindset of Christ,” which means it is not a path to self-doubt or missed opportunities, but the path to life.

Sharon Hodde Miller is a writer, speaker, pastor's wife, and mom of two boys. In addition to recently completing her Ph.D, her first book releases with Baker Books in 2017, and she blogs at SheWorships.com. You can connect with Sharon on Twitter.