The Lies That Trap Us In Unforgiveness

I did not want to forgive her.

The email she sent was cruel and full of unfair accusations and assumptions. We’d been friends through thick and thin, and her response felt like betrayal. It completely caught me off guard. And as resentment took hold, I decided right then and there our friendship was over.

How could she say such things?

Chances are you can recall a time when someone deeply angered or offended you through their heartless words or careless actions. Maybe you saw it coming, or maybe it absolutely blindsided you. It might have been intentional or accidental. Regardless, the last thing you wanted to do was offer forgiveness.

You felt completely justified holding on to the hurt.

Sometimes forgiving feels too big because the offense was even bigger. We decide they don’t deserve a get-out-of-jail-free card. And if we’re totally honest, we’d admit to wanting them to pay for their transgressions. We think, “Why should we forgive and let them off the hook?”

Am I the only one?

We live in a world full of mean people, which means there are plenty of opportunities to be hurt. It’s hard enough when a stranger is nasty, but often our greatest hurts are courtesy of our own family and friends. Those are the worst kinds of hurts. I’m so sorry. 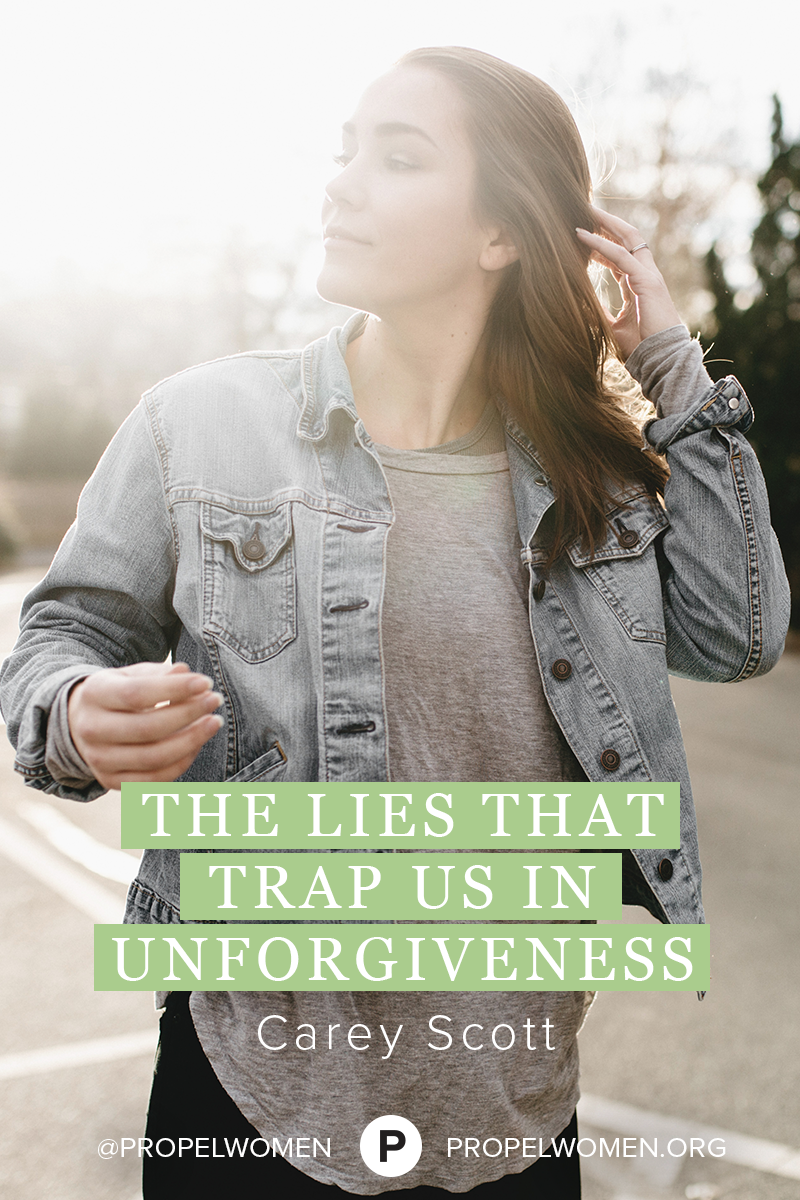 And because they hit so close to home—so close to our heart—we hold on to their unkindness even tighter. We build bricks with our pain and wall ourselves off in an effort to preserve and protect our hemorrhaging self-esteem.

Sometimes it just feels safer that way. I totally get it.

But holding on to unforgiveness hurts you, not them. Your stick-it-to-them strategies really stick-it-to-you instead. And rather than live in freedom, you live offended. You become miserable, and end-up adopting a victim-mentality.

It’s this poor-me kind of thinking that steals joy and hinders your ability to be the woman God created you to be.

The Lord wants us to love the unlovable by forgiving the unforgivable. The two work together in a supernatural way.

Ephesians 4:32 tells us “Instead, be kind to each other, tenderhearted, forgiving one another, just as God has forgiven you because you belong to Christ.”

You see… because God has forgiven our sins, He expects us to extend the same kind of grace.

So how can we effectively love when we refuse to forgive? We can’t.

Unforgiveness clogs your heart. So while you may think harboring anger and hate is hurting the one who hurt you, the truth is that unforgiveness hurts you the very most. It hardens your heart, preoccupies your thoughts, and gives the Enemy a stronghold in your life.

And chances are, you’re justifying unforgiveness based on one of these lies:

Lie #1: Forgiving lets them off the hook.

Giving grace doesn’t mean you’re excusing that person for their offenses. It doesn’t even mean you’re completely over what they’ve done. It simply means you’re not going to let it consume you anymore.

Lie #2: They have to apologize first.

What if you’ve lost contact with them, or the offender was a stranger? What if they’ve died? What if they don’t even know they’ve hurt you? Waiting for someone to own their actions and words is a worthy hope… but an unrealistic expectation.

That’s something only God is capable of doing. Seriously. Remembering a hurt doesn’t necessarily mean you’re holding a grudge. It could just mean you’re a human with memories. And often, it’s those memories that warn you of danger or protect you from further heartache.

So how can you extend forgiveness when it’s the last thing you want to do?

1)    Ask God to expose the lie(s) keeping you from releasing their offense.

2)    Ask God to forgive your sin of unforgiveness.

3)    Ask God for supernatural strength and divine perspective so you can forgive and be free.

I eventually forgave my friend. It wasn’t easy, but it was necessary. As leaders, we cannot afford to let unforgiveness find a home in our heart. It will hinder our ability to be who God has called us to be.

So friends, let’s choose to be women who love well… and forgive fast.

Carey Scott is an author, speaker, and life coach, honest about her walk with the Lord…stumbles, fumbles and all. She is the author of Untangled, a book where she bravely shares her story of abuse, the insecurities birthed from it, and offers practical advice on how to live in freedom. Carey lives in Northern Colorado with her family. Learn more at CareyScott.org. You can also connect with her on Facebook, Twitter or Pinterest.