Nearly ten years ago, I heard Andy Stanley speak these words in a sermon I will never forget.

It was called “The Principle of the Path,” and it began with a simple illustration: If you were to leave the city of Atlanta and drive north, you might end up in Virginia, Pennsylvania, or New York, but do you know where you would NOT end up? Florida. No matter your intentions, no matter how fast or carefully you drove, you would not reach Florida by driving away from it.

It’s a common sense principle we abide by whenever we use a map, but it’s also a principle found in Scripture. Take Proverbs 7. In this passage, Solomon describes a young man who steps into the house of an adulteress. Because the young man is short-sighted and naive, he sees the encounter as a stroke of luck. After all, the woman’s husband is away—no chance of getting caught—and she has an intoxicating night of love planned for the two of them.

So, the man walks through the door. He goes inside under the false notion that there will be no consequences for his actions. He thinks can have his cake and eat it too.

But Solomon knows better. He knows this man is not exempt from all God’s warnings about sin and folly. This man is not the exception to the rule; he is the rule. 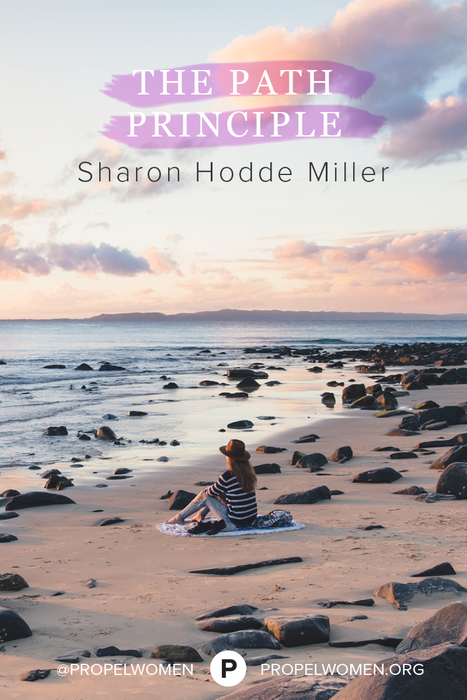 And rather than walk a unique path in which the rules do not apply, this man is on a crowded highway. Countless men and women have gone before him, under the exact same illusion.

This young man believes he is on a path to pleasure and bliss, but he is instead on a path to destruction. Solomon describes it this way: “As an ox goes to the slaughter, or as a stag is caught fast till an arrow pierces its liver; as a bird rushes into a snare; he does not know that it will cost him his life.” (7:22-23)

This young man’s story is the principle of the path at work. His fate reminds us that we cannot attain the abundant life by choosing the path of death. The path of sin, of corruption, of laziness, or ethical compromise will only lead one place. Because direction determines destination.

I have always remembered the principle of the path, because it has countless applications for our lives. For instance:

And of course, the principle of the path applies to leadership too:

This final point isn’t just about our effectiveness as leaders, but the kind of leaders were are becoming. If we manipulate people, hedge on the truth, trample those with less power than us, or compromise our integrity in any way, we have effectively abandoned the path of godly leadership for a path of personal destruction.

Of course, we all make mistakes. Every one of us. In our faith, marriage, parenting, finances, and leadership, we will make bad choices. And when we do, there is more than enough grace to cover and redeem our brokenness. This is the good news of Jesus Christ.

But the principle of the path should chasten us. It reminds us to be wise and clear-eyed about our daily habits.

The principle of the path means that none of our choices take place in a vacuum. Every single one determines who we are becoming. Every single step is in a particular direction on a particular path, so the question we must ask ourselves every day is this: where do I want to go, and am I on a path that will take me there?

Sharon is a writer, speaker, pastor's wife, and mom of two boys. In addition to recently completing her Ph.D, her first book will be released later this year with Baker Books, and she blogs at SheWorships.com. You can connect with Sharon on Twitter.