why i wouldn't date jesus

As I was tucking in one of my favorite 9-year-olds, she prayed for me to find my husband. She and her little siblings are very invested and curious as to why I am not married yet. I’ve assured them–in so many words–that I’m good. I’ve been content with traveling and pursuing my dreams in New York. However, as the years have marched on, so has a lingering desire for companionship.

After praying, my favorite 9-year-old said, “If Jesus was a person I think he’d be the perfect husband for you. You should marry him! Well, I guess that wouldn’t be fair to everyone else.”

The thought ran laps across my mind and I found myself really pondering the thought, if Jesus was here in our lifetime, would I have said yes? At this point you may be thinking, of course you would, you crazy! Truthfully, I wasn’t sure. Jesus is the perfect match in every way (OBVI!), but I had to consider all of the fears, insecurities and apprehensions that have held me back from relationships in the past.

We picture Jesus as the Brawny man or, at least, the best version of a man. He was the originator of the long hair that could easily be thrown into a trendy man bun…all the better to showcase his GQ/hipster-ish beard. He had throngs of people following him and even had a few party tricks (aka MIRACLES) up his sleeve. He was wise, kind, and loved kids (can I hear an amen?!). He had 12 best friends, a good family, plus–hello!–he was inheriting a universe. In short, Jesus puts Mr. Darcy to shame. 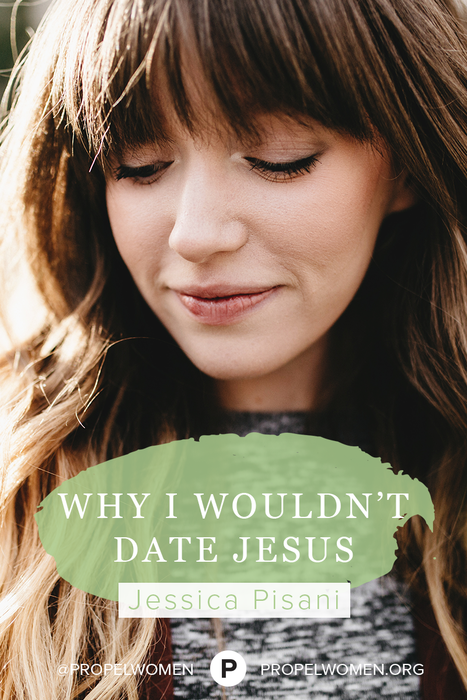 But, let’s think about this for a moment. The truth is, Jesus was plain in looks. He came from an average town and had parents who were scandalized because of him. He was a carpenter for 30 years which means he wasn’t rolling in the dough and seemingly aimless (like, where are your life goals, Jesus?). When he was doing his ministry, he was widely loved but also widely hated. He was misunderstood, even by those closest to him and he went against the grain. Plus, let’s not forget that Jesus had a crazy cousin named John who probably smelled weird and ate bugs.

The truth is, he wasn’t glamorous. He lived a humble life, and he ate with prostitutes and tax collectors. He did all the things we wouldn’t. He was extreme and average in all the areas we would prefer the opposite.

Bottom line, our “picker” is off these days. Our need for attention and validation mutes our desire for real true love. We want superman to rescue us from our singledom and insecurities, when the reality is he’ll come as Clark Kent.

When I realized I wasn’t sure I’d say yes to a marriage proposal from Jesus, I knew something needed to change (starting with the 80’s wedding dress I had pictured in my head). One of the best things I ever did was go to a counselor, who, with prayer and effective tools, helped get to the root of my fears and insecurities. The issue wasn’t Jesus, it was my fear of being loved or seen.

Facing fears and being vulnerable isn’t a “single girl” thing. Rather, it’s a human thing. We as women have this incredible capacity to receive love when fear doesn’t stand in the way. We were created from Love itself, and to be loved extravagantly. I know that when we do the work and let Jesus chip away at the fears and insecurities, what will be left is this incredible authenticity–true, messy, real, and beautiful. An uninhibited girl, ready to say yes.